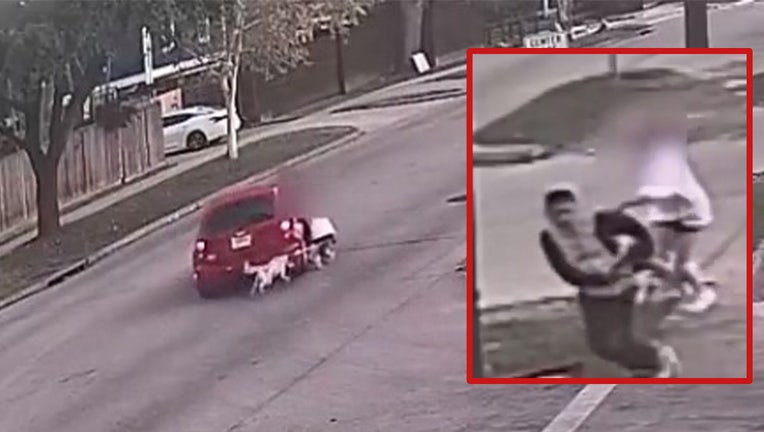 HOUSTON - A woman and her dog are seen in a newly-released video being dragged several feet after being robbed in Houston's Heights neighborhood back in September.

The Houston Police Department’s Robbery Division shared the disturbing video on Monday, asking the public to help identify the suspects in the aggravated robbery.

Police say it happened on Saturday, September 25 at 7:19 p.m. in front of the Valero and Circle K at the intersection of Studewood St and Omar St.

In the video, the woman is walking her dog on the sidewalk when a red Chevrolet HHR pulls up behind her.

A man jumps out of the back seat and approaches her from behind, pointing a handgun at her and demanding her purse.

The suspect then grabs the purse and runs back into the SUV with the victim behind him.

As the suspects begin to drive off, the woman gets caught on the passenger door and was dragged for several feet along with her leashed dog.

The suspects then pushed the complainant off the vehicle and drove off. The woman broke her arm from the fall.

WARNING: The video released by HPD below is disturbing. Viewer discretion is advised.

Surveillance video shows the moment a woman was robbed at gunpoint while she was walking her dog in the Heights neighborhood of Houston. The woman and her dog were dragged by the suspects' car as they drove off.

The suspect that pulled the gun on the victim is described as a Hispanic male with a thin build, who was wearing black pants and a multicolored jacket.