The unusual-looking creatures can be identified by wing-like fins and bizarre blue markings. Venomous sea slugs have recently been spotted along beaches on North Padre and Mustang Islands.

GALVESTON, Texas - Venomous sea slugs, known as blue dragons, have been washing up on beaches along the Texas coast for the last week.

The sea slugs are only about 1 or 2 inches in size, but their sting can be very painful.

"If you get stung by one of these, we say take it easy," said Jace Tunnel from the University of Texas Marine Science Institute. "The sting is very similar to a [Portuguese man o’ war. They feed on man o’ war. It gets their neurotoxin and holds it in there. If you have an allergic reaction, or if the pain is too much to bear, we recommend going to the hospital." 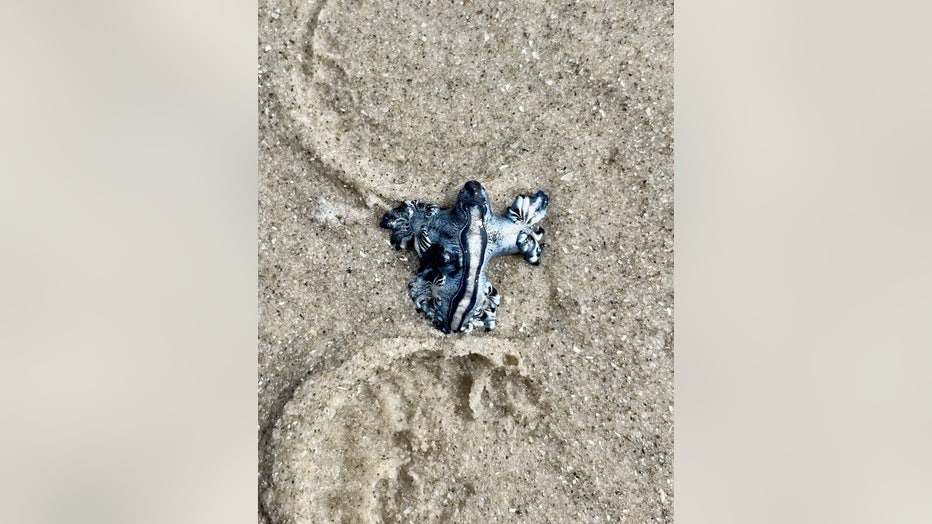 The unusual-looking creatures can be identified by wing-like fins and bizarre blue markings. Venomous sea slugs have recently been spotted along beaches on North Padre and Mustang Islands.

"Right now Mustang Island and North Padre Island is where we’re getting reports over the last week," said Tunnell. "The way the ocean currents work, and the way winds blow things on shore, it’s possible for them to show up in Galveston."

According to Galveston Island Beach Patrol, they hadn’t had any reports of blue dragons as of Friday afternoon. Several people on the beach had never even heard of the unusual sea creature.

"I wouldn’t know what to think [if I found one]," said Beto Hinojosa. "I wouldn’t think it was dangerous."

RELATED: Dolphin dies after reportedly being harassed by Texas beachgoers

"If conditions are right, they can be blown up on shore," said Tunnell. "It’s just the perfect conditions and timing to be able to have this stuff coming up on the beaches."