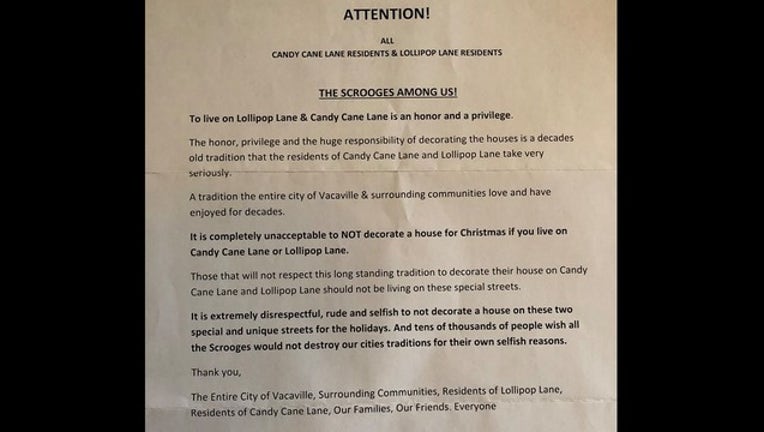 Note left to neighbor who didn't decorate her home for the holidays. Photo courtesy of Lyndia Zara.

VACAVILLE, Calif. (KTVU) - A woman says she was shamed for not properly displaying her appreciation for living on Lollipop Lane – a street in Vacaville home to an annual holiday tradition of decadent decorations. After her house stood bare through December, she received an anonymous note reminding her of her residential privilege.

Evidently the two-street tradition – on Lollipop and Candy Cane lanes –  spans decades. And the author of the note felt so strongly about the lack of decorations that he or she said people who fail to respect the tradition “should not be living on these special streets.”

“It is extremely disrespectful, rude and selfish to not decorate a house on these two special and unique streets for the holidays,” the anonymous author wrote on the letter titled “The Scrooges Among US!” “Tens of thousands of people wish all the scrooges would not destroy our city’s traditions for their own selfish reasons.”

Lyndia Zara was the recipient of the letter. She didn’t decorate this year. Because between caring for her out-of-state mother, who at the time was dying of stage 4 liver cancer, and pulling out the decorations that were all made by her mother, she neither had the time, nor the willingness to appease her neighbors and go out of her way to illuminate a pleasurable experience for others.

“The past four months have been hard on my family,” Zara wrote on a Facebook post. “I was out-of-state caring for my mother. She died in October and I had to handle everything before I could come home. I came home Dec. 1.”

Zara describes the act of acknowledging, and physically touching decorations made by her mother as a process that accelerates her grief. “You have no idea why someone may choose not to decorate,” she said.

For six years straight– every year since moving in – Zara participated in the festivities. And while there is a distaste for the manner in which disappointment was relayed to her, Zara says contributions will continue, but only after she states how she feels.

“To the coward that hides behind anonymity who sent this letter to me: ‘I hope you had a Merry Christmas,” Zara wrote. “Please think before you shame on Christmas.”

Whether the voice of the community was made available by proxy is undetermined. But the author of the note nevertheless signed for all of them, stating “everyone” after listing specific senders. And it’s the move to inject guilt by making her feel like she let people down that stuck a cord with Zara.

“Next year when you come down our street to police our ‘responsibility,’ please don’t,” Zara wrote. “Enjoy those who choose to decorate for your enjoyment and leave the others in peace.”