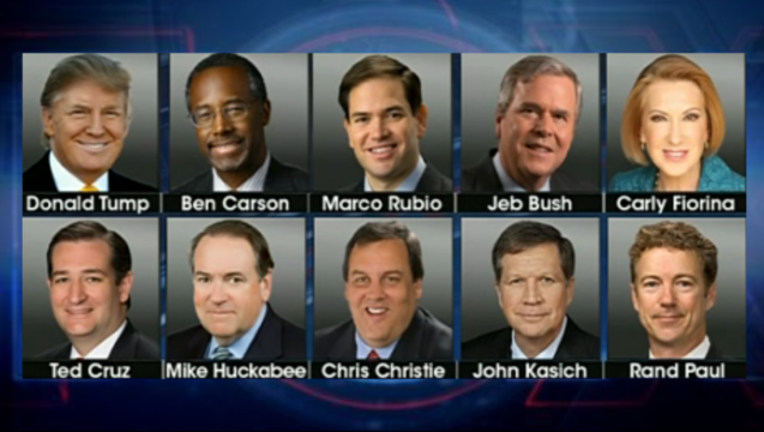 HOUSTON (FOX 26) - WASHINGTON - WASHINGTON (AP) — For months, Republican presidential candidates with dwindling bank accounts and negligible support in polls have been finding reasons to stay in the 2016 race.

Now, a few must weigh whether they can keep competing after being downgraded or excluded from Tuesday's fourth GOP debate. New Jersey Gov. Chris Christie and former Arkansas Gov. Mike Huckabee have been bumped to the undercard debate because of low poll numbers, while South Carolina Sen. Lindsey Graham and former New York Gov. George Pataki didn't qualify for either event.

Each of the candidates has so far vowed to stay in the race, keeping the Republican contest crowded with just under three months until the Iowa caucuses kick off the nominating process. Fifteen Republicans are still running for president, while three Democrats are vying for their party's nomination.

"I'll go there, debate, and as soon as I leave the debate I'll go to Iowa and get back to work," Christie said Friday as he filed his paperwork to run in the New Hampshire primary.

Struggling candidates can see multiple reasons to keep their White House hopes alive. It's relatively inexpensive to campaign in Iowa and they can use television appearances as a way to get free publicity. Running for president can be a stepping stone to high-profile television jobs and other lucrative opportunities. And given that the field remains unsettled, there's always the possibility that an unlikely candidate can make a late surge in one of the early voting states.

Huckabee pulled off a surprise victory in the 2008 Iowa caucuses, and former Pennsylvania Sen. Rick Santorum did the same four years later, though neither ultimately secured his party's nomination.

"Candidates never really run out of reasons to run," said Kevin Madden, a Republican strategist who advised 2012 GOP nominee Mitt Romney. "Many are staying in because the lesson learned from past campaigns is that it's possible to go from 1 percent to winning the caucuses, or at least beat expectations."

Yet some Republicans are concerned, believing that one of the reasons the race remains unsettled is because there are still so many candidates.

Wisconsin Gov. Scott Walker openly worried about that when he abruptly ended his campaign in late September amid a cash shortage. He encouraged other candidates to follow his lead "so voters can focus on a limited number of candidates who can offer a positive conservative alternative to the current front-runner."

The front-runner Walker was referring to was Donald Trump. The billionaire real estate mogul is still atop the GOP field, causing heartburn for establishment Republicans who fear he couldn't win in the general election — or that his controversial statements on immigration and minorities could hurt the party even if he's not the nominee.

In his typical no-holds-barred style, Trump has been calling out rivals who are struggling and pointing them toward the exits.

"There are too many people," Trump said this week. "If a person has been campaigning for four or five months and they're at zero or 1 or 2 percent, they should get out."

Other candidates have avoided assessing when their rivals should end their campaigns, a process that is often emotional and deeply personal.

But for weeks, Jeb Bush supporters have said the crowded field is contributing to the former Florida governor's struggle to gain traction.

"For Jeb, the field's got to get narrowed down a lot to shine," said Philip Taub, a supporter from New Hampshire. Iowa State Rep. Ron Jorgenson said Bush is "suffering just from a lot of fragmentation with so many people in the race."

The New York Times, in a biting editorial, has called for Christie to end his campaign and refocus on his duties as governor. "You are accountable for what happens in New Jersey," the paper wrote last week.

And in Louisiana, Gov. Bobby Jindal's pursuit of the presidency has led both Democrats and Republicans in the state to criticize him for being an absentee state executive. Jindal, whose term as governor ends in January, has spent most of the last several months campaigning across Iowa.

He is facing a major cash crunch, ending the last fundraising quarter with $261,000 on hand. But his financial disclosure forms show he's finding ways to campaign cheaply, bunking at affordable hotel chains. Santorum, who is also low on cash, appears to be looking around for deals on online travel sites, with multiple payments to Expedia and Hotels.com.

Of course, for most candidates, there eventually comes a time where a lack of money and lack of votes becomes too great to overcome.

"They need to recognize that moment and make a move," Madden said.