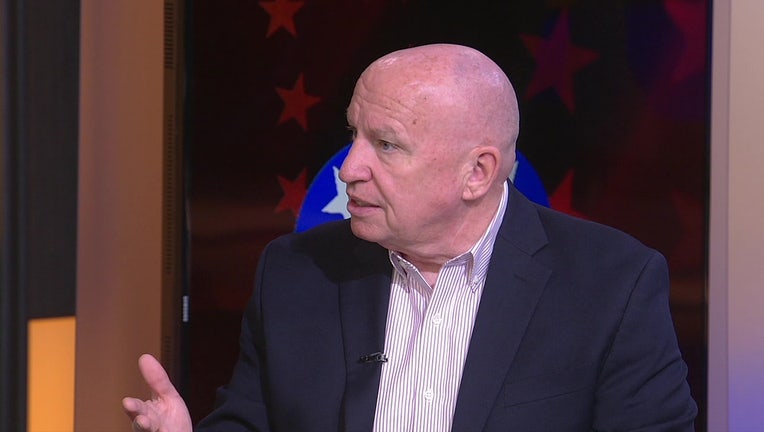 THE WOODLANDS, Texas - U.S. Rep. Kevin Brady says his current term will be his last.

Rep. Brady made the announcement on Wednesday during The Woodlands Economic Outlook Conference.

He is currently serving his 13th term.

"I have an announcement.

And I can’t think of a better place to make it than right here at The Chamber I led, in the community I live, and to business and community leaders I admire and consider friends.

I am retiring as your Congressman. This term, my 13th, will be the last.
I set out to give my constituents the representation you deserve, the eﬀectiveness you want and the economic freedom you need. I hope I delivered. It’s a remarkable privilege to work for you in the U.S. House of Representatives.

Thanks to your strong support I’ve been blessed with many unbelievable opportunities to lead, including becoming only the third Texan in history to chair the House Ways & Means Committee. I’ll never forget the trust you gave me these many years.

And I can never repay the support from my wife Cathy. She is a true angel (you have no idea), who made all this possible and is the best thing in my life. Ever.

I love this job. And thanks to incredible lawmakers I’ve worked with in Congress and the White House, I’ve been fortunate to do big things for our country. Bigger than a small town boy from Rapid City, South Dakota whose father died when young, with all ﬁve of us children raised by a remarkable single mom, could ever dream of.

I’ve noticed that anytime you retire in Washington, D.C. some are eager to assign a motive. So let me tackle those. Is this because I’ve lost faith in a partisan Congress and the political system? Absolutely not.

I work with some of the most dedicated people in the nation – talented, hardworking and serious about their responsibilities – in both parties. And after 25 years in the nation’s Capitol I haven’t yet seen a problem we can’t solve or move past. Not one. Especially when we put our best ideas and intentions together.

Given the times, I’m sure some will say "It’s Trump’s fault". Nonsense.

I’m proud to have worked with the President and lawmakers from both parties to redesign America’s broken tax code, reform the IRS, pass the new
US-Mexico-Canada trade agreement, reform America’s retirement system, end the unfair ObamaCare individual mandate and its harmful taxes, and sign into law a historic national ban on surprise medical bills. And we preserved my ﬁrst success as Chairman: negotiating for Speaker Paul Ryan an end to the 40-year ban on selling U.S. crude oil overseas.

The Tax Cuts lifted millions of Americans out of poverty, and gave hope to so many the old tax code had left behind. America recaptured the title as the most competitive economy in the world, bringing manufacturing jobs and investment back home to America from overseas.

As you may not know, because House Republicans limit committee leadership to six years, I won’t be able to Chair the Ways & Means Committee in the next session when Republicans win back the House majority. Did that factor in? Honestly, some.
But as I see it, our committee leader term limits ensure lawmakers who work hard and eﬀectively have the opportunity to lead, to bring fresh ideas to our committee work. In my view, it’s a good thing. And the great news is that our Ways & Means Committee is incredibly talented. I’m conﬁdent about its future.

In the end, I’ll leave Congress the way I entered it, with the absolute belief that we are a remarkable nation – the greatest in history.

Despite what the media and social media bombards you with each day, we are not the hateful, racist, divided nation they peddle. They are dead wrong. Turn oﬀ that noise and you’ll hear the true heartbeat of America.

We remain the most charitable nation on the planet. We are a nation so valued that a million military men and women have sacriﬁced their lives for our freedoms and opportunity.

And look at yourself, look around at your friends and our community: We come together every day voluntarily to feed the hungry, house the homeless, rescue our veterans, race to help our neighbors in a natural disaster…and more.

We do this without a single thought about the color of our anyone’s skin, their religious beliefs, or the circumstances of their birth. We volunteer, we give from our pockets and our hearts, we care for each other. Because that is who America is.

Are we a work in progress? Absolutely, and there’s plenty of work yet to be done.

But that’s what makes America so special. Every parent, every generation, is determined to leave a nation for our children – and others – better than the one we inherited. We devote much of our adult lives to this.

As a result, the American Dream is still alive and well for anyone willing to work for it until it’s theirs. That is why I remain optimistic about our country, because I have faith in our people. I’ve seen up close how remarkable you are, and while I am leaving Congress I am excited about our future.