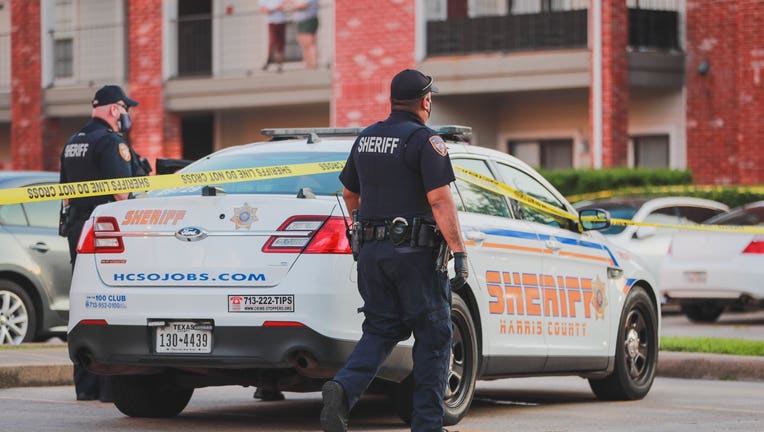 HARRIS COUNTY, Texas - Officials are searching for three suspects after two men were found shot in an apartment complex in northwest Harris County and later died at the hospital.

Harris County sheriff's deputies responded to a weapons disturbance in the 11200 block of West Road around 7:15 p.m. on Thursday.

When deputies arrived, they found two Hispanic men dead from apparent gunshot wounds inside one of the apartment units.

Deputies spoke with several witnesses who reported hearing a fight commotion followed by gunshots. Then, witnesses say, three Hispanic males were seen running from the scene immediately after the shooting.

The suspects are described as reported below:

The first suspect is approximately 5’8, pale complexion, and was wearing a black bandanna with a black baseball cap.

The second suspect has a dark complexion with curly hair and was wearing a facial mask with the Mexican flag printed.

The third suspect is short and was wearing an Astros baseball cap.

Two of the suspects were seen carrying handguns and the third suspect carrying a rifle. There were no reports of a possible suspect vehicle.

The Harris County Sheriff’s Office Homicide and Crime Scene Units responded to the scene to conduct the investigation.

The investigation is on-going and investigators urge anyone with information to contact the homicide unit at 713-221-6000 or Crime Stoppers at 713-222- TIPS.