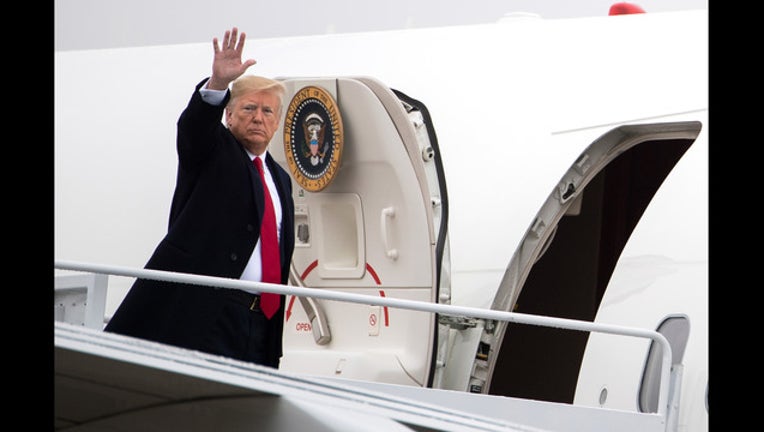 JOINT BASE ANDREWS, MD - NOVEMBER 5: (AFP-OUT) President Donald Trump boards Air Force One as he travels to Ohio and Indiana for campaign rallies on November 5, 2018 at Joint Base Andrews, Maryland. (Photo by Kevin Dietsch-Pool/Getty Images)

WASHINGTON, DC - Miriam Adelson is a doctor, philanthropist and humanitarian, but is perhaps best known as the wife of Sheldon Adelson, a Las Vegas casino magnate considered one of the nation's most powerful Republican donors. She gets to add a new title Friday when President Donald Trump honors her with the Presidential Medal of Freedom.

Miriam Adelson is among seven people Trump is recognizing with the medal, the highest honor America can give a civilian.

The other recipients are retiring Republican Sen. Orrin Hatch of Utah, one of the longest-serving senators in U.S. history; Alan Page, who was elected to the Minnesota Supreme Court after an NFL career with the Minnesota Vikings and Chicago Bears; and Roger Staubach, the Hall of Fame Dallas Cowboys quarterback.

The Adelsons gave Trump's presidential campaign a $30 million boost in the final months of the 2016 race. The couple followed up this election cycle by donating $100 million to the Republican Party for last week's midterms.

Miriam Adelson, 73, is an Israeli-born, naturalized U.S. citizen who earned a medical degree from Tel Aviv University and founded a pair of drug abuse treatment and research centers in Las Vegas and Tel Aviv. She and her husband own the Las Vegas Review-Journal and Israel Hayom newspapers.

The Adelsons are also avid supporters of Israel. Their passion for strengthening the country, along with Israel-U.S. relations, has helped keep such policy priorities as relocating the U.S. Embassy from Tel Aviv to Jerusalem front and center in the Republican Party and the Trump administration.

Trump moved the embassy in May, and Sheldon Adelson, who had offered to personally fund the move, sat in the front row for the ceremony.

Robert Weissman, president of the public interest group Public Citizen, questioned whether the decision to recognize Miriam Adelson was based on merit.

"It's emblematic of the corrupt and transactional presidency of Donald Trump, and it is a shame, but not a surprise, that he is corroding and corrupting a civic treasure, an honor like the Medal of Freedom," Weissman said.

Elliott Abrams, who held foreign policy roles under Presidents Ronald Reagan and George W. Bush, called the complaints "ridiculous." Abrams noted the Miriam Adelson has donated her time and her money to combatting addiction. He contrasted her award with those given by President Barack Obama to Chita Rivera, Robert De Niro, Barbra Streisand, Ellen DeGeneres and Warren Buffett, among others.

"People who said nothing about all of that and now criticize the medal for Dr. Adelson are simply being nasty and partisan, and are not actually taking a look at her remarkable knowledge and charity in the chemical addiction field," Abrams said.

White House spokeswoman Lindsay Walters said Trump used the process follow by previous administrations to settle on his group of honorees. It was coordinated by the staff secretary's office, incorporating recommendations from the public, relevant presidential advisory bodies, the Cabinet and senior White House staff, she said.

The award is given to individuals "who have made especially meritorious contributions to the security or national interests of the United States, to world peace, or to cultural or other significant public or private endeavors."

Miriam Adelson said she is "deeply humbled and moved by this exceptional honor."

"Liberty is at the heart of my decades of work against substance abuse. Drug dependency is enslavement, for the user and his or her family and society, and treatment an emancipation," she said in a statement Thursday.

E. Fletcher McClellan, a political science professor at Elizabethtown College in Pennsylvania, said presidents have no limits on making these awards.

"He has total discretion as to who and when and how," said McClellan, who has studied the Presidential Medal of Freedom.

Christopher Devine, a politics professor at the University of Dayton, questioned Miriam Adelson's impact on American culture or national interests as compared to past recipients like Oprah Winfrey or Bruce Springsteen. Both Winfrey and Springsteen received medals from Obama, whom they supported politically.

"This is what leaves many people wondering whether President Trump singled her out for an award as something of a thank-you for her and husband Sheldon Adelson's very substantial donations to Republican candidates and causes over the years, including ones in support of Trump's election in 2016," said Devine, who wrote a book about the Presidential Medal of Freedom.