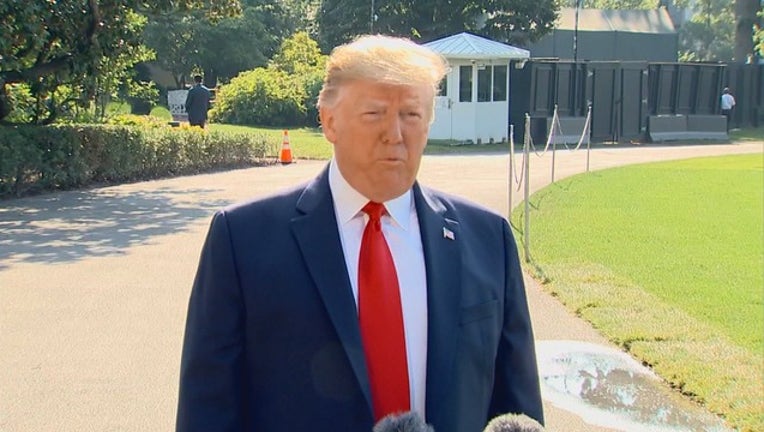 President Donald Trump linked the suspected gunman in the Dayton mass shooting to liberal candidates and organizations Wednesday, even as he pushed back against critics who tied the El Paso attack to his own comments on immigration.

WASHINGTON (AP) -- President Donald Trump linked the suspected gunman in the Dayton mass shooting to liberal candidates and organizations Wednesday, even as he pushed back against critics who tied the El Paso attack to his own comments on immigration.

Posts from a Twitter account that appeared to belong to Connor Betts, the 24-year-old Dayton shooter, endorsed communism, bemoaned Trump's election and supported Democratic Sen. Elizabeth Warren, who is running for president. Betts killed nine people including his sister Sunday before officers fatally shot him.

Antifa is a reference to anti-fascist protesters. The assault in a nightlife district "had nothing to do with President Trump."

Trump and White House officials stressed repeatedly that they have avoided blaming liberals for the Dayton shooting, but they noted again and again that the shooter was an apparent supporter.

Mass shooting suspects "are sick people. These are people that are really mentally ill, mentally disturbed," Trump told reporters shortly before departing for Dayton to meet with first responders and victims.

Democrats rejected any connection between the gunman's motives and liberal politics. They said Trump was seeking to distract Americans from criticism that the president's own rhetoric on immigration contributed to the mass shooting in El Paso that left 22 dead and many others wounded.

Authorities believe the suspected gunman in that shooting, 21-year-old Patrick Crusius, posted an anti-immigrant screed online shortly before the attack. In the 2,300-word post, Crusius said he worried that a "Hispanic invasion of Texas" was furthering the elimination of the white race.

"Leaders have a responsibility to speak out and to not incite violence," Warren campaign spokeswoman Kristen Orthman said in a statement. "But let's be clear - there is a direct line between the president's rhetoric and the stated motivations of the El Paso shooter."

Trump told reporters that his opponents are trying to score political points by linking his comments about immigrants to the El Paso shooting. But he sought to do the same with the Dayton shooter.

"I think my rhetoric brings people together," he said when asked about the impact of his comments.

While investigators were still trying to determine a motive for the Dayton shooting, Betts' apparent Twitter feed offered a window into his psyche and politics.

Betts' name did not appear on the Twitter account called "iamthespookster," but it did include several selfies of him -- sitting at his kitchen table, drinking a beer, driving home after voting -- that resemble other known photos of him, right down to a distinctive tattoo on his left bicep.

The Associated Press and organizations including the Anti-Defamation League took screenshots of some of the feed before it was taken down by Twitter. Other parts could be retrieved on internet archive sites.

Dayton police have not said how Betts' online comments may factor into the investigation. They have said they are looking into Betts' apparent fascination with guns, violence and mass shootings.

"We're aware he had social media," Dayton police spokeswoman Cara Zinski-Neace said. She would not elaborate.

The Twitter account, which dated to 2013, had a little over 500 followers but had issued nearly 10,000 tweets. And it was highly active up until the hours before the early Sunday shooting.

The account frequently reposted far-left and anti-Trump memes, including such phrases as "Make Racists Afraid Again" and "Kill All Fascists." The user retweeted memes that compared immigrant detention centers to concentration camps. Another retweet included a photo that suggested slashing the tires of Border Patrol agents.

On the night of the 2016 presidential election, a post responded to a Twitter hashtag asking to sum up the election in three words. It read: "This is bad." In June, the account tweeted "I want socialism, and I'll not wait for the idiots to finally come around to understanding."

When another Twitter user last month posted the question "martyr or villain?" with an article about a man killed in July in an attack on an ICE detention facility, the account replied "Martyr."

In reply to a March post from another user proposing "3 Guilt Free Ways to Kill Fascists," the account replied "Hammer, brick, gun." Several posts reflected a fascination with firearms, retweeting photos of assault-style rifles with comments such as "awesome."

Last December, shortly before Christmas, the account wrote: "This is America: Guns on every corner, guns in every house, no freedom but that to kill."