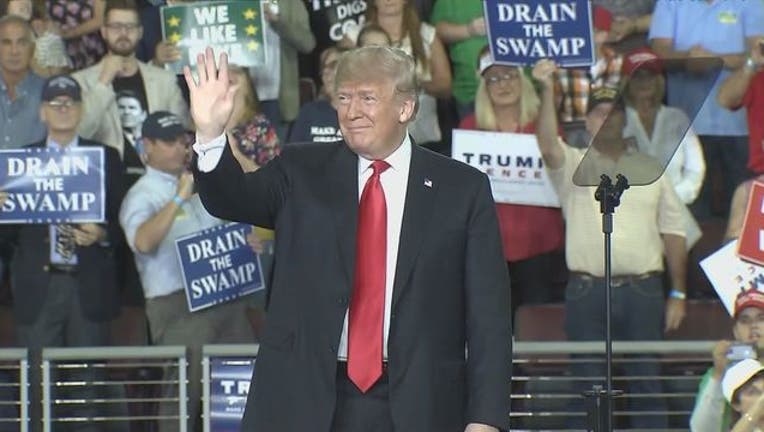 ERIE, Pa. (AP) — As Hurricane Michael pounded Florida on Wednesday, President Donald Trump took shelter at a campaign event in Pennsylvania, where he sought to boost Republicans before the midterms.

Trump acknowledged the hurricane at the top of his rally in Erie, offering his "thoughts and prayers" to those in the storm's path and promising to "spare no effort" in the response. He promised to travel to Florida "very shortly."

Then Trump turned back to politics. With weeks to go before the critical November elections, Trump and his fellow Republicans are engaged in an all-out midterms blitz. They have been invigorated by the successful nomination of Justice Brett Kavanaugh to the Supreme Court and are seeking to use the contentious moment to unify the GOP and stave off Democratic energy at the polls.

That Trump kept his appointment in Erie underscored the importance of this effort to Republicans. Earlier in the day, Trump received a hurricane briefing at the White House on the Category 4 storm. He told reporters he faced a "quagmire" about whether to attend the Pennsylvania rally because "thousands of people" were already lined up for the event.

He ultimately decided to attend, a move he criticized President Barack Obama for six years ago after Superstorm Sandy hit the East Coast.

Trump also celebrated Kavanaugh's appointment amid Democratic opposition and sexual misconduct allegations against the nominee. Trump called it a "historic week," saying, "What the radical Democrats did to Brett Kavanaugh and his beautiful family is a national disgrace."

For weeks, Trump has been escalating his attacks on Democrats. He continued that effort Wednesday, claiming that Democrats want to "impose socialism and take over and destroy American health care." He added: "Democrats want to abolish America's borders and allow drugs and gangs to pour into our country."

Trump also returned to one of his favorite themes — reliving his stunning 2016 victory.

"Was that the most exciting evening?" he said to cheers.

Trump also ticked through what he sees as his top achievements, including tax cuts and a new trade deal with Canada and Mexico. He talked about exiting the Iran nuclear deal and drew wild applause for mentioning his plans for a Space Force.

Trump attacked Casey for opposing Kavanaugh's nomination, saying he had "joined the left-wing mob." He also accused Casey, named for his politician father, for "banking on the name of his father." Trump's own father, Fred, was a successful real estate developer who set his son up in business. The New York Times recently reported that Donald Trump received at least $413 million from his father over the decades, much of that through dubious tax dodges, including outright fraud.

Earlier Wednesday, Trump published an op-ed in USA Today that attacked Democrats over "Medicare for All" health care proposals. In his op-ed, Trump said Democrats have moved away from centrism, claiming the "new Democrats are radical socialists who want to model America's economy after Venezuela."

He added: "Government-run health care is just the beginning. Democrats are also pushing massive government control of education, private-sector businesses and other major sectors of the U.S. economy."

Trump's attack on Medicare for All omits any mention of improved benefits for seniors that Democrats promise.

Medicare for All means different things to different Democrats. The plan pushed by Sen. Bernie Sanders, the Vermont independent who challenged Hillary Clinton for the 2016 Democratic presidential nomination, would expand Medicare to cover almost everyone in the country, and current Medicare recipients would get improved benefits. Other Democratic plans would allow people to buy into a new government system modeled on Medicare, moving toward the goal of coverage for all while leaving private insurance in place.

Democrats, who think health care is a winning issue going into the midterms, also sought to focus voter attention Wednesday. In the Senate, Democrats unsuccessfully sought to scuttle Trump's push for short-term health insurance plans, which are less expensive but provide skimpier coverage. While the vote failed, Democrats think the move will help them in November.