LOS ANGELES - Forecasters expect newly formed Tropical Storm Eta to strengthen into a hurricane before it reaches the coast of Central America by Monday evening.

Eta is now the 28th named storm and ties the record set back in 2005 for the most named storms in an Atlantic hurricane season. However, this will be the first time the Greek letter Eta will be used as a storm name, because after the 2005 season ended, meteorologists went back and determined there was a storm that should have gotten a name, but didn’t.

Sunday morning, Eta had maximum sustained winds of 40 mph and was moving quickly to the west at 15 mph. The system was centered about 400 miles east of the Nicaragua-Honduras border. 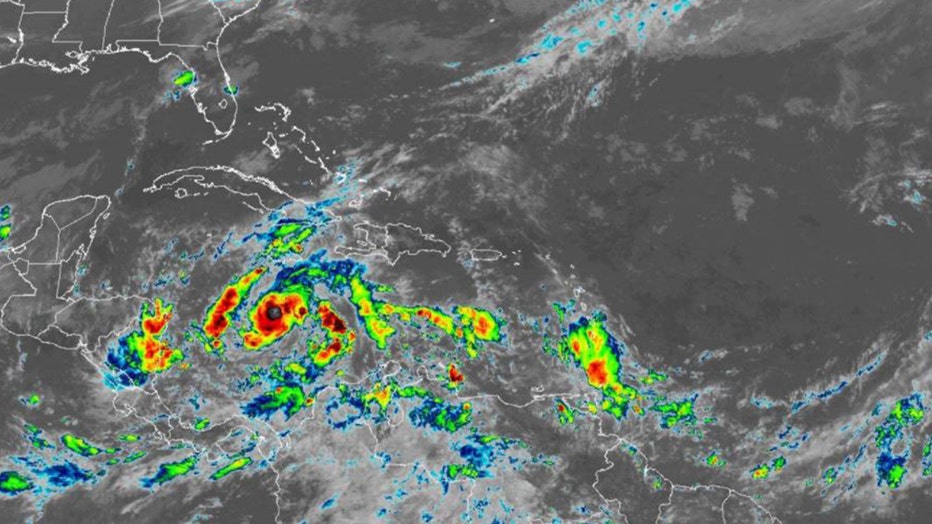 Thursday, heavy rainfall from Eta could also impact portions of Jamaica, the Cayman Islands and Central America. This could lead to life-threatening flash flooding and river flooding.

Millions of people were without power and at least six were dead Thursday after the 27th named storm, Hurricane Zeta, slammed into Louisiana. This was the fifth landfall in the state this season alone. The storm system moved across the South, leaving thousands of downed tress and shattered buildings.

Hurricane Zeta made landfall as a Category 2 hurricane Wednesday afternoon.

Zeta was a post-tropical storm Thursday evening with maximum sustained winds of 50 mph. The last of the heavy rainfall moved over the mid-Atlantic before dissipating.

There is still plenty of time left this hurricane season, which runs until the end of the month — Nov. 30.