WASHINGTON - President Donald Trump held a “victory” press conference in the White House Thursday, celebrating his acquittal by the Senate in his impeachment trial.

Before Trump arrived, his legal team walked in to a standing ovation by those in attendance.

“This should never, ever happen to another president,” Trump said.

Trump alluded to his firing of former FBI Director James Comey as the cause of his impeachment.

House Democrats impeached him after news came to light that he sought an investigation into former Vice President Joe Biden and his son, Hunter, in exchange for vital military assistance funds that were withheld from Ukraine.

Proud of the headline “Trump acquitted,” he then held up a copy of Thursday’s edition of The Washington Post. 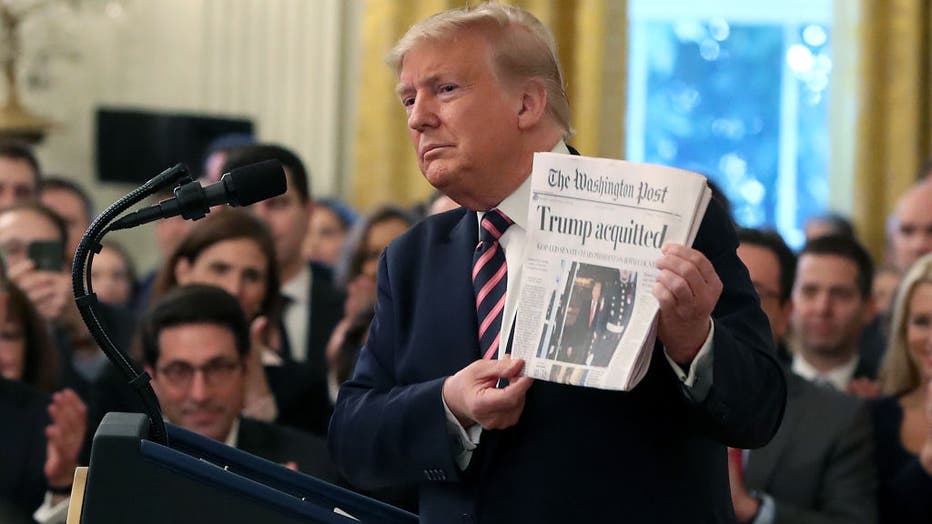 WASHINGTON, DC - FEBRUARY 06: U.S. President Donald Trump holds up a newspaper as he speaks one day after the U.S. Senate acquitted on two articles of impeachment, in the East Room of the White House February 6, 2020 in Washington, DC. (Photo by Mark

“You can take that home. Maybe we’ll frame it,” Trump told the crowd.

Trump touted the hardships of his presidency, starting with the investigation into Russian interference in the 2016 election.

But the speech was not without praise for his allies. He applauded his legal team and said Senate Majority Leader Mitch McConnell did a good job during the trial.

He praised Mike Lee, who serves as one of Utah’s U.S. Senators while calling him the “most popular Senator from that state,” a subtle insult to Mitt Romney.

Romney was the lone Republican in the Senate to vote to convict Trump on one article of impeachment — abuse of power.

The president’s attention then turned back to the Democrats who led his impeachment.

Trump then accused Pelosi of claiming to pray for him, but not really praying, echoing sentiments he expressed during the National Prayer Breakfast earlier Thursday, where Pelosi was present.

"They took nothing, and brought me to a final vote of impeachment. That's a very ugly word to me. That's a very dark word, impeachment," Trump said, continuing his rail against Democrats before going on to laud what he called his "total acquittal."

“Now we have that gorgeous word. I never thought it would sound so good," Trump said. "It's called 'total acquittal.'”

Trump spent the most of his remaining time thanking and applauding the congressional Republicans who came to his defense.

As Trump spoke, nearly every inch of the White House's East Room was packed with supporters. Among them: Republican senators who cast some of the votes to acquit him, McConnell and Rep. Chuck Grassley, several Cabinet members, including Attorney General William Barr and Treasury Secretary Steve Mnuchin, and staunch House allies including Reps. Jim Jordan, Devin Nunes and Minority Leader Kevin McCarthy.

Trump praised McCarthy and alluded to him being next to wield the gavel as Speaker of the House.

“You’re going to be Speaker of the House because of this impeachment hoax,” Trump said of McCarthy. “I really believe it. And I’m going to work hard on it.”

Going one by one, Trump spent nearly a half hour in rambling remarks saluting GOP lawmakers who backed him both in the Capitol and on television.

After lauding his allies, Trump circled back to Democrats and Comey.

"They were going to try to overthrow the duly-elected government of the United States," Trump said of Democrats, going on to claim that if he hadn't fired Comey, he might never have "found it out."

"In my opinion, it's almost like they want to destroy our country, but we're not going to let that happen," Trump said.

This story was reported from Atlanta. The Associated Press contributed to this report.