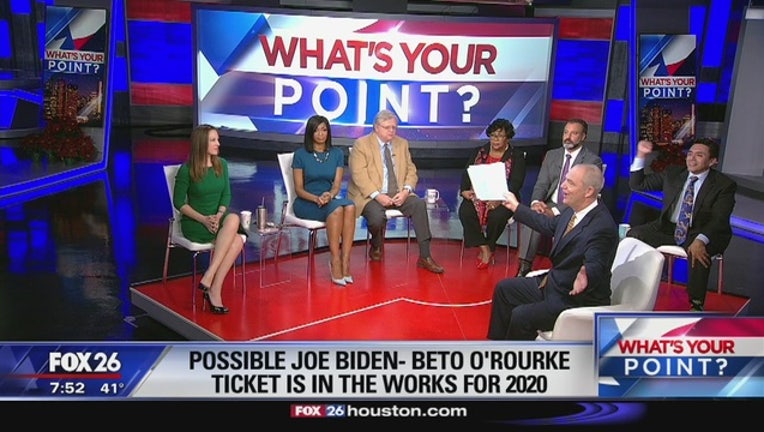 The move Wednesday gives the 44-year-old former San Antonio mayor an early start to what's shaping up as a crowded Democratic field without a clear front-runner to challenge President Donald Trump.

Castro indicated in an AP interview that his mind was all but made up.

"I know where I'm leaning, for sure," said Castro, who has said for weeks that it was likely he would seek the nomination.

An exploratory committee usually is a formality before a candidate launches a presidential campaign. It legally allows potential candidates to begin raising money.

But just as important for Castro, the step gives him an early jump on bigger name Democrats who are considering running but are taking a slower approach.

No potential contender is more ascendant than outgoing Rep. Beto O'Rourke, who lost last month in a surprisingly close race against Sen. Ted Cruz, R-Texas. O'Rourke has excited donors and activists who are now prodding him to seek the presidency.

Castro would be among the youngest candidates in the field and the most prominent Latino. He played down the attention that others are generating and pointed to past election cycles in which early favorites ended up faltering.

"People might say right now, 'Well, hey, you're way down here in polling that's taken.' The most dangerous place to be right now is actually in the pole position," Castro said. "It doesn't bother me that in December of 2018 I'm not right up at the top of the list. If I decide to run, it would be because I believe I have a compelling message and I'm going to work hard and get to the voters and I believe I can be successful."

"He's talented. He ran a good race against Ted Cruz," Castro said. "I'll let him talk about his future."

Castro said he has not spoken to former President Barack Obama about his potential candidacy but plans on consulting Democratic leaders. Obama has spoken to O'Rourke, who has said he won't make a decision on 2020 until after leaving Congress in January.

Obama picked Castro to take over the Department of Housing and Urban Development in 2014. Two years later, Castro was on the short list of Democratic presidential nominee Hillary Clinton's potential running mates.

For Castro, running for president would fulfill a destiny that Democrats have projected since he was elected San Antonio mayor at 34, followed by his star-making turn as the keynote speaker at the Democratic National Convention in 2012.

He is the grandson of a Mexican immigrant and son of a Latina activist. His twin brother, Joaquin Castro, is a Democratic congressman from Texas. Julian Castro said the Latino community has been treated "like a pinata" under Trump and deserved a candidate in the field.

"I'm also very mindful, especially now for the Latino community, that there's a particular meaning to my candidacy," Castro said. "We can't go through the 2020 cycle with nobody on that stage because of what's happened over the last couple of years."

Young and telegenic, Castro rose to national prominence early in his career as a Latino leader from a state that Democrats are eager to retake after decades of Republican dominance. But in Texas, O'Rourke has eclipsed Castro after getting closer to a statewide victory than any Democrat in a generation. It now puts Texas in the formerly unthinkable position of having two Democratic presidential candidates in the same year.

The last Texas Democrat to run for president was Sen. Lloyd Bentsen, who had a short-lived campaign in 1976.

Maryland Rep. John Delaney is the only declared 2020 Democratic presidential candidate so far. Others are expected to announce their intentions in the coming weeks.

AUSTIN, Texas (AP) - When it comes to a 2020 presidential run, Beto O'Rourke is still playing hard to get - even as the buzz around him intensifies.

The three-term Democratic congressman murmured "No decision. No decision on that," when pressed by an attendee during a town hall Friday in his native El Paso who playfully demanded: "You're going to run for president, right?"

A onetime punk rocker, O'Rourke became a political star in national liberal circles, raised $80-plus million and came within three percentage points of upsetting Republican Sen. Ted Cruz to become the first Democrat to win statewide office in Texas in nearly a quarter century. The 46-year-old is giving up his House seat and has said he'll wait until he finishes his term Jan. 3 before making up his mind on 2020.

Amid his indecision, O'Rourke's name has continued to rise among top potential Democratic presidential candidates - even climbing to at or near the top in some opinion polls.

"Whoever is running may very well be running against somebody who has not the slightest respect for our norms, our traditions, civility, dignity, decency and public life," O'Rourke said. "Where you can say anything that you want to from the highest perch of power in this land."

He continued of 2020: "This is the mother of all tests for this democracy and whether we can run a campaign, have candidates at all levels from schoolboard to the White House who are willing to focus on issues, on our potential, on our promise, on the future instead of our fears, instead of attacking one another personally, instead of going for the most base impulse and instincts among us."

O'Rourke, whose populist brand of optimism was a hit with many Texas voters, said he had planned to make Friday his last day in Congress and spend it packing up his belongings and heading back to Texas. Instead, though, he's planning to return to Capitol Hill next week for discussions on passing federal spending bills "because the government will run out of money on Dec. 21" unless Congress acts.

Trump has vowed to help force a government shutdown unless funding to expand the wall along the U.S.-Mexico border is approved - something O'Rourke calls inhumane and ineffective.

"I will vote against any budget proposal that comes forward that adds to the already 600 miles of walls and fencing and physical barriers that we have in this country," he said. "Not only is it a waste of your money at a time that we are $21 trillion in debt, but we are projected to add $1 trillion in deficit spending to that debt just in this next fiscal year."

O'Rourke crossed into Ciudad Juarez, Mexico, later Friday and headed to an immigration shelter to mingle with men, women and children, mostly from Central America, who want to claim asylum in the United States because they are fleeing violence or political persecution back home. Most said they have been forced to wait days - and assigned numbers scribbled on their arms - before being allowed to reach border crossings and formally make such claims.

"We're here to understand your story and to see how we can help you seek asylum in our country," O'Rourke said in Spanish to a group from Guatemala.

Advocates O'Rourke spoke to at the shelter accused the U.S. of effectively "rationing asylum," arguing that authorities are deliberately slow-playing the process. They say families sometimes give up waiting and try to cross illegally, only to be captured and face potential criminal charges.

Speaking to reporters upon returning to El Paso, O'Rourke repeated that he wasn't ready to make a 2020 decision, noting that he didn't expect presidential race talk to heat up so far from the election. He added that he may have a better idea of his next move after "everything settles," perhaps after the end of the year.

On Saturday, O'Rourke is touring Tornillo, the tent city about 30 miles outside El Paso, where 2,300 immigrant teens are being held at what began as an emergency shelter but now is taking on a permanent feel - costing taxpayers up to $1,200 per child, per day.

BEXLEY, Ohio (AP) - Outgoing Ohio Gov. John Kasich said Thursday that he'd prefer to run for president as a Republican, but only if he's entering a primary he could win.

In an interview with The Associated Press, Kasich acknowledged he probably couldn't defeat President Donald Trump if the election were held today.

He says he's seriously considering his options and letting his advisers monitor the daily troubles Trump is facing, including talk of impeachment.

"If you're going to run as a Republican you have to have a sense that if you get into primaries you can win. Right now, probably couldn't win," he told the AP. "But that's today. It's ever changing."

Kasich, leaving office after eight years because of term limits, has previously made two presidential runs. Should he enter the Republican fray in 2020, it would put in play his electorally critical home state, which Kasich won resoundingly in the 2016 primary against Trump and others.

Kasich said he's been told there's money around the country for a run but acknowledged that fundraising would be a factor.

Kasich's political adviser John Weaver responded: "Be careful what you wish for."

Kasich was the last primary challenger left in the GOP race when he stepped down in 2016, even though he only won his home state of Ohio. But he has been a consistent critic of Trump since then, dinging the president on everything from tax cuts that weren't paid for to the immigration policy of family separation.

Asked if Trump has done anything he agrees with, Kasich said border control, lower taxes, and higher financial contributions from European allies are all needed. But the president has set too negative a tone when he's not wrong, with an overall "dismal" record, Kasich said.

The Ohio Democratic Party chairman, no fan of many of Kasich's actions as governor, said Thursday that he admired Kasich's willingness to take on Trump.

"For the sake of the country, I do think having someone, one person in that party, willing to actually speak out, is something that's a good thing," chairman David Pepper said.

Dressed in slacks, a pullover and casual shoes, Kasich spoke for about 30 minutes at the governor's residence in suburban Bexley, about 2 miles (3 kilometers) from his downtown Columbus offices. Unlike previous governors, Kasich chose not to live in the residence, keeping his home in another Columbus suburb.

Kasich said he's not worried about defending his anti-Trump positions to the Republican National Committee in the event of another run, saying he goes "right to the folks."

Though Republicans control nearly all statewide offices in Ohio, Kasich has faced problems with his own party here. He backed expansion of Medicaid over party members, and also unsuccessfully pushed for taxes on the oil and gas industry because of booming revenue from natural gas fracking.

Just this month, Republican state lawmakers have pushed a strict abortion ban Kasich previously vetoed and a gun bill leaving out a Kasich-backed measure that would allow gun rights to be temporarily stripped from people who show warning signs of violence.

The governor called those actions a political consideration by fellow Ohio Republicans he had no plans to fight over.

He also said he didn't want to be known as a critic of Trump, but rather as a national voice for every person mattering, and every person thinking about their impact on the world.

"These things matter to me a great deal, in that we can all live a life a little bigger than ourselves," Kasich said.

Sherrod Brown of Cleveland is coming off a decisive re-election victory in November that helped bring him national attention as a potential national candidate. Brown says his message is on "the dignity of work" and fighting for workers without compromising progressive values.

He also says his Ohio victory shows that approach works. That's because it came on an otherwise dismal day for Democrats in statewide and congressional elections in a state Republican Donald Trump carried handily in 2016.

Brown is one of dozens of Democrats who are considered possible 2020 candidates.

His Facebook town hall is aimed at people nationwide and is set for Sunday at 4 p.m. EST.