The state's chief emergency manager says the Texas government should not be in the business of hiring doctors and nurses.

DALLAS - The state's chief emergency manager says the Texas government should not be in the business of hiring doctors and nurses.

He defended the state's decision to deny requests from local hospitals to help bring in more medical workers.

Texas Department of Emergency Management Chief Nim Kidd says cities and counties have hundreds of millions of dollars in previously allocated federal relief money. He says that money should be used to pay for hospital travel staff.

But hospitals say the state can bring surge staff in sooner and for less money. 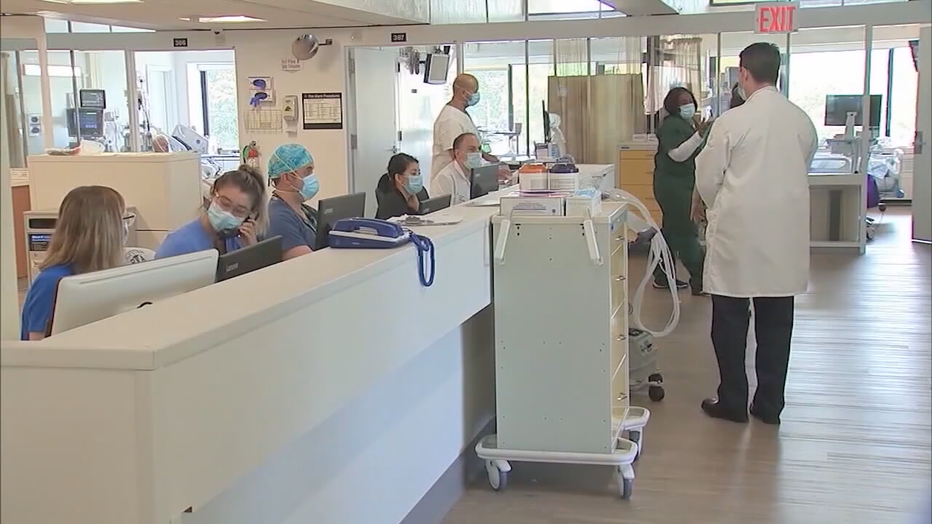 North Texas is expected to reach more than 2,000 COVID patients by the end of the week. Hospitals want people to get vaccinated as they deal with the new surge and staff shortages.

"In Texas, there will not be any government-imposed shutdowns or mask mandates," Gov. Greg Abbott said on Wednesday. "Everyone already knows what to do."

While Texans may know what to do, there aren’t enough people doing it.

North Texas hospitals have more than 1,900 COVID patients. That’s more than the entire state had four weeks ago.

"What you can see is the rise in cases is similar to what we've seen in previous waves, and it might be steeper," she said.

As hospitals deal with the surge of mostly unvaccinated patients, they’re in desperate need for more staff.

"Vaccine is our number one solution to this problem that we have right now," Kidd said.

The state’s chief emergency manager says he speaks to local officials about the pandemic regularly. He defended the state’s decision to deny requests from North Texas hospitals to provide more than 600 additional medical staff.

Kidd says hospitals should be the ones doing the hiring this time.

"We, the state, don't hire doctors and nurses every day," he said. "And if we get back into this contracting business, the only place we have to pull those nurses from is another existing hospital."

But the DFW Hospital Council says the state can negotiate cheaper rates and get staff to hospitals faster.

Kidd says local governments have enough federal money to pay for the staff.

"Each of them gets to make their own decision for it," he said. "My hope would be that they prioritize public health and public safety."

MORE: North Texas COVID-19 hospitalizations back over 1,900, highest since mid-February

In two weeks, Dallas County commissioners will meet to discuss how those funds will be allocated.

But the state still has billions in covid relief that hasn’t been spent. And there are no plans to spend that money until after redistricting is finished in the fall.

Kidd made some suggestions for hospitals in the meantime.

"Are we canceling those elective procedures? Those non-life threatening procedures and facilities?" he said. "Have we opened up additional wings and places for COVID-only patients?"

But Stephen Love with the DFW Hospital Council says it’s not that simple.

"Even if you cut back on elective surgeries, it doesn't mean it’s going to help you on the COVID unit," he said. "The people on the elective surgeries may not be critical care type clinicians, and you can’t just move them over there and put them on a COVID unit."

Parkland Hospital says it recently had to open its second COVID unit. There are five total, plus two more for overflow if needed.