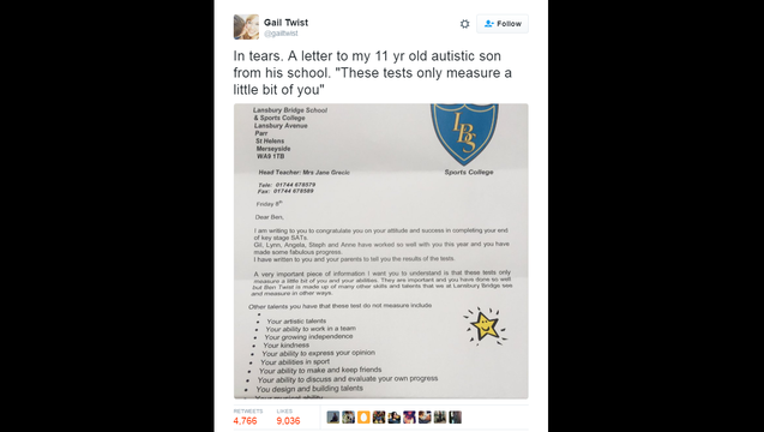 (FOX 11) - A mother was brought to tears after her son with autism failed his exams and received a touching letter from his teacher.

Gail Twist, who lives in England, posted a photo of the letter on Twitter.  Her 11-year-old son Ben received the note from his school after the exam results were sent to his parents, according to Buzzfeed News.

"In tears," she wrote on Twitter. "A letter to my 11-year-old autistic son from his school. ‘These tests only measure a little bit of you'."

"I am writing to congratulate you on your attitude and success in completing your end of key stage SATs," his teacher Mrs. Clarkson wrote.

"A very important piece of information I want you to understand is that these tests only measure a little bit of you and your abilities," she went on to write. "They are important and you have done so well but Ben Twist is made up of many other skills and talents that we at Lansbury Bridge see and measure in other ways.”

The teacher went on to bullet point a list of Ben's other talents, including his artistic skills, independence, kindness, abilities in sports, ability to make friends and ability to work in a team.

The post has been retweeted nearly 5,000 times -- and several people have tweeted praise to Ben's school: