Police arrested a suspect after multiple people were stabbed at the Parliament Hill area in Quebec, late on October 31.

QUEBEC CITY - A man dressed in medieval clothing and armed with a Japanese sword was arrested Sunday on suspicion of killing two people and wounding five others on Halloween near the historic Château Frontenac hotel in Quebec City.

The attack on randomly chosen victims went on for nearly 2 1/2 hours while police pursued the man armed with a katana throughout the city’s downtown core on foot, Quebec Police Chief Robert Pigeon said.

Quebec's prosecutor’s office said Carl Girouard, 24, faces two counts of first-degree murder and five counts of attempted murder. Girouard appeared before a judge via video-conference Sunday and the next hearing in the case is expected to be on Thursday

Police said their initial information indicated the suspect's motive was personal and not terrorism.

“Last night we were thrust into a night of horror when a 24-year-old man who does not live in Quebec City came here with the clear intention of taking as many victims as possible,” Pigeon said.

Pigeon said the suspect, who was from the Montreal area, had no criminal record, but that “in a medical context” over five years ago, he had shared his intention to commit this type of act. He said the investigation continued. 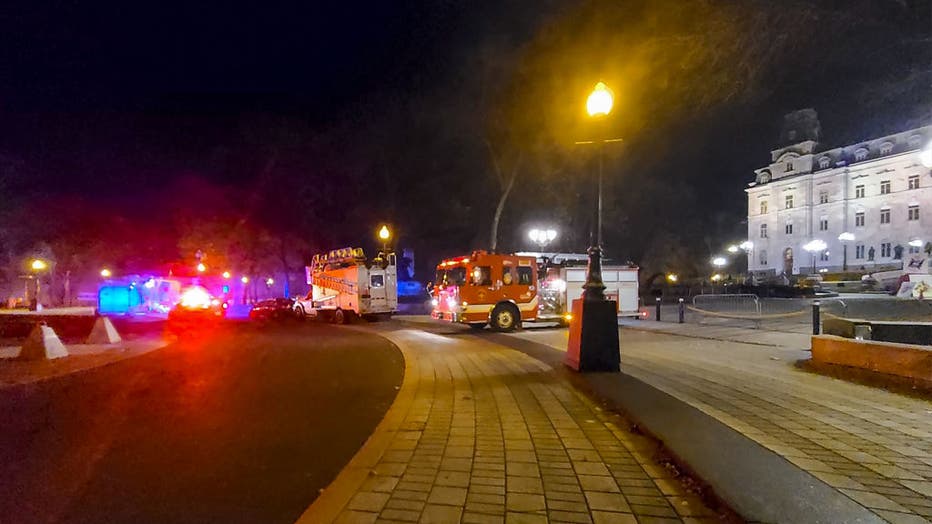 FILE - Firefighter trucks are parked in front of the National Assembly of Quebec, in Quebec City, early on November 1, 2020, after two people were killed and five wounded by a sword-wielding suspect dressed in medieval clothing. (JORDAN PROUST/AFP via Getty Images)

Police were first notified of the stabbings near the National Assembly shortly before 10:30 p.m. Saturday, and warned people to remain indoors as they hunted for the attacker.

The five injured victims were taken to a hospital. “Some have very significant lacerations but we do not fear for their lives,” Pigeon said.

Steve Jolicoeur, a freelance photographer, said the deceased male had his throat slit. Jolicoeur said another person was cut on the shoulder while another was cut on the head and hand.

He said he witnessed the arrest of the suspect, who threw his sword in the air. 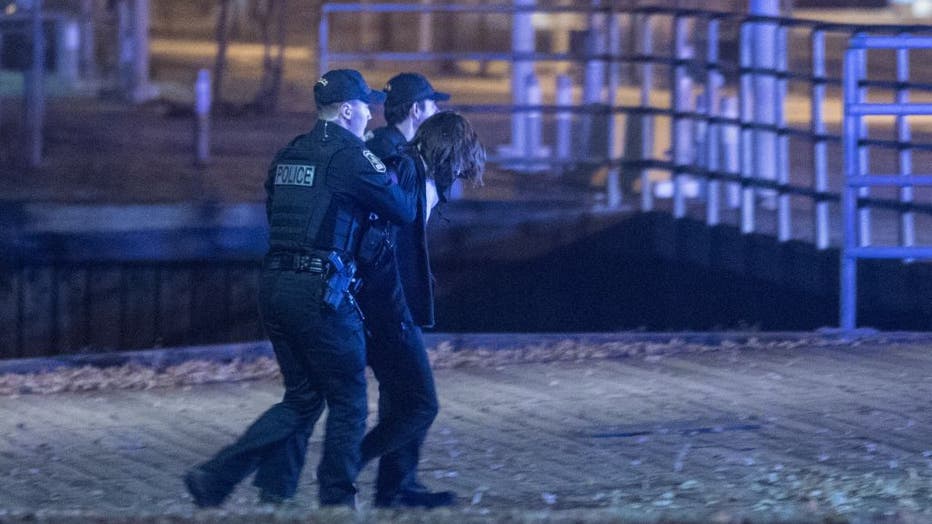 FILE - Police officers detain a suspect near the National Assembly of Quebec, in Quebec City, early on November 1, 2020, after two people were killed and five wounded by a sword-wielding suspect dressed in medieval clothing. (STEVE JOLICOEUR/AFP via Getty Images)

“He seemed confused,” Jolicoeur said. “He was in black clothes, like a ninja.”

Police were searching his car and residence. He was due to make a video court appearance later Sunday

Quebec City Mayor Regis Labeaume said Canada needs to have a debate about how to deal with mental illness. He said the attack has shaken the city, which is still recovering from a shooting at a mosque in 2017 that killed six people. 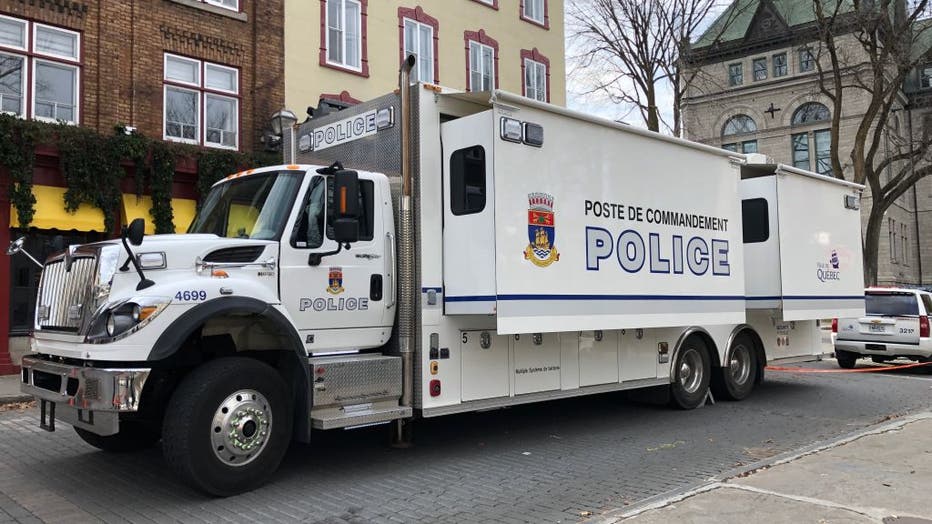 FILE - A police vehicle blocks off a street in Old Quebec, with the Quebec City Town Hall in the background on November 1, 2020 in Quebec City, Montreal. (ANNE-SOPHIE THILL/AFP via Getty Images)

“Quebec is waking up after a night of horror. Words fail me to describe such a tragedy. I offer my condolences to the families of the victims,” Quebec Premier Francois Legault tweeted.

Carlos Godoy, who lives in the area, said police K-9 units had searched his backyard as they hunted for the suspect.

“It’s a full moon, it’s October 31st. It’s Halloween, and it’s a lockdown weekend. No one should be out on the streets,” Godoy said. “And I’m in an extremely quiet neighborhood because there are no tourists nowadays.”

The area around the Chateau Frontenac, the towering landmark of the walled old city, is usually bustling with tourists in normal times.

Associated Press writer Rob Gillies in Toronto and Storyful contributed to this report.