What is the COVID-19 Hate Crimes Act?

The COVID-19 Hate Crimes Act aims at reducing anti-Asian violence in the U.S.

Amid an increase in Asian hate-related crimes, nearly one-third of Asian Americans surveyed fear someone might threaten or physically attack them due to their race or ethnicity, according to a recent survey conducted by the Pew Research Center.

Of the 352 people who were Asian, approximately 45% said they have experienced someone threatening or physically attacking them; a person acting uncomfortable while around them; someone subjecting them to a racial slur or joke; someone saying they need to go back to their home country or blaming them for the COVID-19 pandemic. 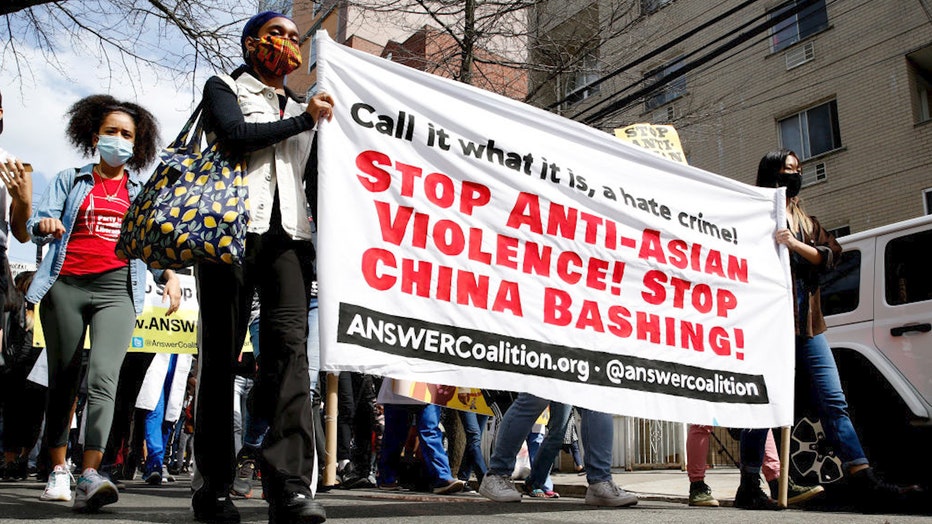 FILE - Supporters of the Asian community hold signs during a Nationwide Day of Action rally Against anti-Asian violence at the Flushing neighborhood in the Queens borough on March 27, 2021 in New York.

Additionally, 81% of the Asian American adults who were surveyed said they believe violence towards the Asian community has grown. The survey respondents cited several reasons for the increase in violence, including former President Donald Trump and his rhetoric on China at the onset of the pandemic; general racism towards Asian communities; and the need for a scapegoat during an uncertain and stressful time.

A majority — 20% — said that Trump’s use of terms such as "kung flu" or "Chinese flu" contributed to the rise in hate and violence against Asian Americans.

One respondent told Pew that "they are blaming Asians for the coronavirus pandemic, thinking they bring this to our country."

Another respondent cited "a mix of coronavirus news and its origins in China coupled with talks regarding racial inequality. Asians are not accepted as people of color as they are seen as the model minority, but also are seen as foreign because they are not White."

About three in four Asian Americans who responded to the survey said that even before the onset of the pandemic, they had experienced some form of discrimination due to their race or ethnicity.

The survey also found that "Asian adults are more likely to express fear over discrimination than other groups. About a third (32%) say they fear someone might threaten or physically attack them, a greater share than among Black adults (21%), Hispanic adults (16%) or White adults (8%)," according to Pew.

Despite fears of discrimination or physical harm due to their race, about 32% of Asian Americans said someone they know has expressed support for their race or ethnicity, according to Pew.

The release of data from Pew’s survey came just a day before the Senate passed a bill that is aimed at combatting the rise of hate crimes against Asian Americans and Pacific Islanders.

The measure would expedite the review of hate crimes and provide support for local law enforcement in response to thousands of reported violent incidents in the past year. Police have seen a noted uptick in such crimes against Asian Americans and Pacific Islanders. That includes the February death of an 84-year-old man who was pushed to the ground near his home in San Francisco; a young family that was attacked in a Texas grocery store last year; and deadly shootings last month in Atlanta, where six of the victims were of Asian descent.

The names of the six women killed in Georgia are listed in the bill, which passed the Senate overwhelmingly on a 94-1 vote. The House is expected to consider another similar bill in the coming weeks.

"These unprovoked, random attacks and incidents are happening in supermarkets, on our streets, in takeout restaurants — basically, wherever we are," said Democratic Sen. Mazie Hirono of Hawaii, the legislation’s lead sponsor.

She said the attacks are "a predictable and foreseeable consequence" of racist and inflammatory language that has been used against Asians during the pandemic, including slurs used by Trump.

"For more than a year, the Asian American community has been fighting two crises — the COVID-19 pandemic and the anti-Asian hate," Rep. Grace Meng, D-N.Y., a co-author of the bill, said last week at the Capitol.

Republicans agreed to back the bill after the Senate also voted on and rejected a series of GOP amendments, including efforts to prevent discrimination against Asian Americans in college admissions and reporting about restrictions on religious exercise during the pandemic. Republican Sen. Josh Hawley was the only "no" vote.