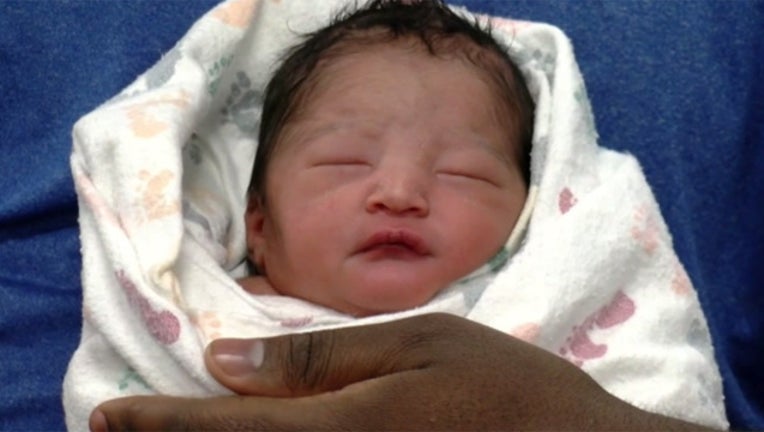 OMAHA, Neb. (AP) - A woman whose baby was due mid-May went into labor early and gave birth at a Nebraska zoo.

Her mother, Kymica Hubbard, 24, said the birth took about two minutes from when her water broke.

"I was having contractions and it was getting closer and closer together and I was telling my husband, 'OK, it's time to get off the (zoo) train and let's go to the emergency room,' but he kept telling me I'm over-exaggerating," she said.

Hubbard was so taken by surprise that she was still standing when Drea's head appeared. Her husband, Justin Hubbard, 27, caught the child and wrapped her in a sweater as other zoo visitors gathered around.

"She was crying. You know, cooing. And it was just the most beautiful thing that a man can ever see. I mean, it was a truly blessed experience," Justin Hubbard said. "It was a crazy experience. I mean, I wouldn't trade it for the world."

Neither parent noticed that a large crowd had surrounded them until after the baby had been delivered.

"When I looked up, I could see tons of people," Justin Hubbard said. "I saw people from the side, like, videotaping. It was unique. Just the love that surrounded it made it even better."

Kymica Hubbard's reaction to the experience was a little different.

"I never thought I'd be having a baby in a public place," she said.

The zoo's nurse, Krystal Hartmann, said Drea is the first human baby she's seen delivered at the facility in her 17 years of working there.

"We're going to the zoo," Justin Hubbard said on where Drea's future birthday parties will be held. "We're planning on having (her birthday) annually at the zoo."

While the name Drea had been the name the couple chose beforehand, they decided to nickname her, "Pooh Bear."