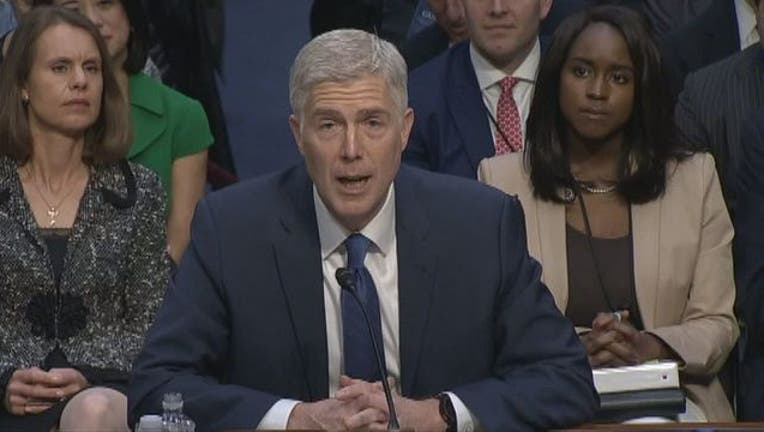 WASHINGTON - WASHINGTON (AP) — The Senate confirmed Neil Gorsuch to become the newest associate justice on the Supreme Court Friday, elevating Donald Trump's nominee following a corrosive partisan confrontation that could have lasting impacts for the Senate and the court.

Vice President Mike Pence was presiding as the Senate voted 54-45 in favor of Gorsuch, a 49-year-old veteran of the 10th U.S. Circuit of Appeals in Denver whose conservative rulings make him an intellectual heir to the late Justice Antonin Scalia, whose seat he will fill.

Gorsuch won support from 51 of the chambers' Republicans as well as three moderate Democrats up for re-election in states Trump won last fall: Joe Manchin of West Virginia, Heidi Heitkamp of North Dakota and Joe Donnelly of Indiana. GOP Sen. Johnny Isakson of Georgia, who has been recovering from back surgery, did not vote.

The outcome was a major win for Trump, his biggest congressional victory to date, as well as for Senate Majority Leader Mitch McConnell, R-Ky., who kept Scalia's seat open after the justice's death in February 2016. McConnell refused to hold hearings for President Barack Obama's nominee Merrick Garland, a move that enraged Democrats but that Republicans now hail as a political master stroke.

After he is sworn in, Gorsuch will restore the court's conservative voting majority that existed before Scalia's death, and which could persist for years or even grow over the course of Trump's administration. He is expected to be sworn in Monday, in time to hear the final cases of the term. He was nominated by Trump shortly after the January inauguration.

Republicans exulted in the victory.

"His judicial temperament, exceptional intellect, unparalleled integrity, and record of independence makes him the perfect choice to serve on the nation's highest court," Trump said in a statement. "As a deep believer in the rule of law, Judge Gorsuch will serve the American people with distinction."

"This is a person of extraordinary credentials who will bring honor to the Supreme Court for many, many years to come. So it is indeed a proud day," McConnell said. He told reporters that he views his refusal to fill Scalia's seat, which was initially questioned by some fellow Republicans, as "the most consequential decision I've ever been involved in."

For many conservatives, Trump's choice of Gorsuch made up for any number of other weaknesses in his candidacy and his administration. Gorsuch was on a list of potential justices recommended by the Federalist Society and the Heritage Foundation during the campaign, and some Republicans even credit the Supreme Court vacancy as one reason Trump won the November election. In exit polls, 21 percent of voters called Supreme Court appointments "the most important factor" to their vote, and among those people 56 percent voted for Trump.

Democrats denounced the GOP's use of what both sides dubbed the "nuclear option" to put Gorsuch on the court, calling it an epic power grab that would further corrode politics in Congress, the courts and the United States. Many Republicans bemoaned reaching that point, too, but they blamed Democrats for pushing them to it.

Gorsuch's confirmation Friday was preceded by a Senate floor showdown Thursday in which Democrats initially mounted a filibuster, denying Gorsuch the 60 votes needed to proceed. Republicans then acted unilaterally to lower the vote threshold on Supreme Court filibusters from 60 to a simple majority in the 100-member Senate.

Sen. John McCain of Arizona, a senior Republican, warned of the implications of lowering the 60-vote threshold for Supreme Court nominees, thereby eliminating any role for the minority party in ratifying the selection.

"I am very concerned about the future, which will then, with only a 51-vote majority required, lead to polarization of the nominees as far as their philosophies are concerned, when the majority does not have to consider the concerns and the votes of the minority," McCain said, though he himself voted with McConnell and the rest of the Republicans to lower the vote threshold.

The Senate change, affecting how many votes a nominee needs to advance to a final confirmation vote, will apply to all future Supreme Court candidates as well. Trump himself predicted to reporters aboard Air Force One Thursday that "there could be as many as four" Supreme Court vacancies for him to fill during his administration.

"In fact, under a certain scenario, there could even be more than that," Trump said. There is no way to know how many there will be, if any, but several justices are quite elderly.

Even as they united in indignation, lawmakers of both parties, pulled by fierce political forces from left and right, were unwilling to stop the confirmation rules change. And in many ways the showdown had been pre-ordained, the final chapter in years of partisan warfare over judicial nominees.

Even as senior Republicans lamented the voting change, McConnell and some allies argued that all they were doing was returning to a time, not long ago, when filibusters of judicial nominees were unusual, and it was virtually unheard-of to try to block a Supreme Court nominee in that fashion.