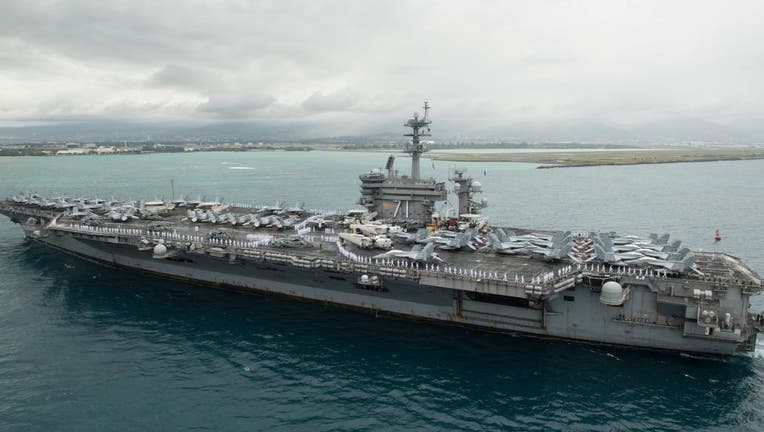 NEW YORK - A sailor assigned to the coronavirus ravaged crew of the USS Theodore Roosevelt has died from the virus.

The sailor had been admitted to the Intensive Care Unit (ICU) of the U.S. Naval Hospital Guam on April 9, 2020 and died of COVID-related complications on Monday, April 13, 2020.

The name of the sailor was being withheld until 24 hours after next-of-kin is notified.

The sailor tested positive for COVID-19 March 30, was removed from the ship and placed in an isolation house on Naval Base Guam with four other USS Theodore Roosevelt sailors.

Like other sailors in isolation, he received medical checks twice daily from Navy medical teams.

At approximately 8:30 a.m., Apr. 13, the sailor was found unresponsive during a daily medical check.

CPR was administered by fellow sailors and an onsite medical team but it was unsuccessful.

The USS Theodore Roosevelt arrived in Guam on 27 March for a scheduled port visit for resupply and crew rest.

The commander of the ship, Capt. Brett Crozier was dismissed on April 3, 2020, after a letter he penned to warn of coronavirus cases on board ended up in the hands of the media.

Navy Secretary Thomas Modly said Crozier “demonstrated extremely poor judgment” in the middle of a crisis. He said the captain copied too many people on the memo, which was leaked to a California newspaper and quickly spread to many news outlets.

He said Crozier should have gone directly to his immediate commanders, who were already moving to help the ship.

The USS Theodore Roosevelt, with a crew of nearly 5,000, is docked in Guam, and the Navy has said as many as 3,000 will be taken off the ship and quarantined. More than 200 sailors on the ship have tested positive for the virus.

The captain of a U.S. Navy aircraft carrier facing a growing outbreak of the coronavirus was fired Thursday by Navy leaders who said he created a panic by sending his memo pleading for help to too many people.