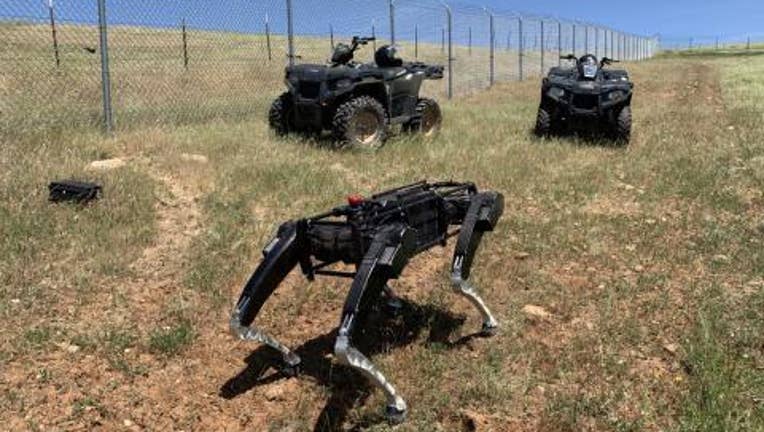 WASHINGTON - "Robot Dogs" will soon be patrolling the U.S.-Mexico border according to the Department of Homeland Security.

These four-legged robotic quadrupeds weigh in at approximately 100 pounds and look like something out of science fiction horror.

DHS says the machines are critical in patrolling the harsh landscape of the American Southwest.

"The southern border can be an inhospitable place for man and beast, and that is exactly why a machine may excel there," said DHS Science and Technology Derectorate manager Brenda Long. "This S&T-led initiative focuses on Automated Ground Surveillance Vehicles, or what we call ‘AGSVs.’ Essentially, the AGSV program is all about…robot dogs."

Reaction to the armed dogs has been mixed but police view them as just another tool.

"Due to the demands of the region, adding quadruped mechanical reinforcements is a smart use of resources. Despite the dangers, and maybe even using them as cover, there are many types of illegal activity that happen in the harsh border zones," DHS said in a statement.

Police use of such robots is still rare and largely untested — and hasn’t always gone over well with the public.

Late last year, the New York Police Department starting using one of the robo-dogs after painting it blue and renaming it "Digidog." It went mostly unnoticed until New Yorkers started spotting it in the wild and posting videos to social media. the robot dog in New York, which was created by robotics firm, Boston Robotics, quickly became a sensation, drawing a public outcry that led the police department to abruptly return Digidog to its maker.

"This is some Robocop stuff, this is crazy," was the reaction in April from Democratic U.S. Rep. Jamaal Bowman. He was one of several New York politicians to speak out after a widely shared video showed the robot strutting with police officers responding to a domestic violence report at a high-rise public housing building in Manhattan.

But despite public outcry, the adoption of the robot dog is being praised by the U.S. military.

In Oct. last year, a robot dog armed with a sniper rifle was unveiled in Washington, D.C. at an annual meeting of the Association of the United States Army.

Ghost Robotics is the company developing both the sniper rifle robotic dog and the ones that will be used to patrol the border.

The Pennsylvania-based Ghost Robotics has been building the four-legged Q-UGV (Quadrupedal Unmanned Ground Vehicles) robots since 2015.

While some may worry about a robot drone with a lethal sniper rifle that Popular Science reports has been adopted by Homeland Security and Special Operations snipers, Ghost Robotics CEO Jiren Parikh told New Scientist on Thursday that the weapon is "fully controlled by a remote operator."

"There is a human controlling the weapon, there is no autonomy or AI," he assured.

While reaction to the armed dogs has been mixed, Pentagon policy states that all robotic weapons should be under the control of a human operator.