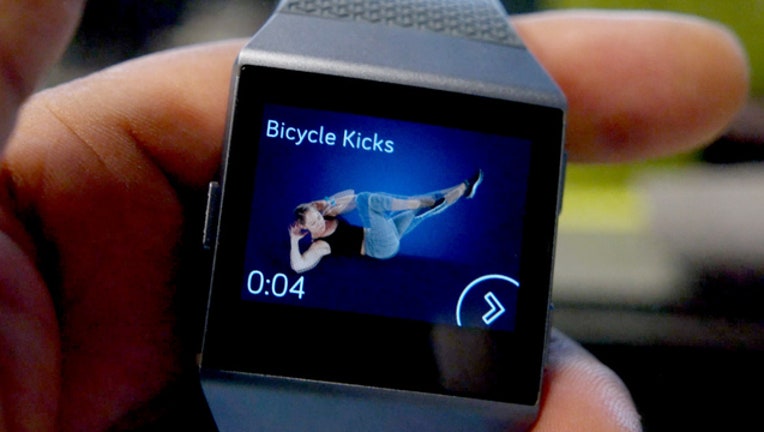 FOX11, Los Angeles - Whether you’re on a tight budget, or have a decent amount of disposable income to throw at your health and wellness products, maybe it’s community you’re after, a solid support system to help you on your journey, Fitbit seemingly has something for everyone. Up until now though, they haven’t really had a full-fledged smartwatch. With the introduction of the Ionic, they’re finally in the smartwatch game but other manufacturers have a healthy head start, so is the Ionic good enough to make its mark and earn your dollar? Let’s find out!

Ions are everywhere. They’re a part of everything and Fitbit is hoping that their smartwatch, the Ionic, will become a part of everything you do. The problem with fitness watches, as I’ve reviewed them, is that they are often jacks of all trades, master of none. That’s all about user experience though, which we’ll get to in a bit. First, let’s take a look at the Fitbit Ionic’s hardware.

The Ionic is an improvement on the Blaze on many levels. Though some may prefer the more diminutive size of the Blaze, the Ionic is larger and features a more rectangular shape than the square Blaze. Unlike Blaze and many of the other Fitbit products, the Ionic does not snap out of a housing. It’s a fixed affair with interchangeable bands. These bands are proprietary in how they connect with the Ionic, so you won’t be able to hit up Amazon or Ebay and order any old third-party 20mm band. That said, Fitbit is one of the most popular fitness wearables on the market so there are already quite a few third-party Ionic bands available when you hit up Amazon. What you’ll get when you unbox the Ionic is a great looking watch, charging cable, and second set of bands. Another improvement over the Blaze is the charge cable. This time around there’s no need to remove the device from its frame to charge. The Ionic’s charge cable attaches magnetically to the pogo pins on the underside of the watch, just above the heart rate sensor.

The display on the Ionic is GorillaGlass 3 and seems to be pretty durable, standing up to the daily bumps and scrapes of wristwatch wear. It’s a large, bright display which looks great indoors and out. The watch case itself is aluminum and comes in three color options: Silver Gray, Burnt Orange, and Smoke Gray. It’s pretty well sealed this go round and eliminates one of my biggest complaints with smartwatches and fitness trackers, waterproofing. Though the Ionic doesn’t specifically label it’s water resistant IP rating, the literature states that the watch is water resistant to 50 meters (5ATM/150 feet) and you can swim with it. Great! A smartwatch I don’t feel like I have to baby. That said, there are people on the interwebz who are still questioning it’s waterproofing because ingress certification has a lot to do with water pressure at continuous pressures for specific periods of time. For example, swimming presents challenges to ingress which are different than wearing the watch in the shower or a jacuzzi. The jets of a jacuzzi or spray from a shower head may present greater constant pressure than that produced when swimming in shallow water.

Even with the case being well sealed, you get three buttons for operating the watch, in addition to the fact that it is a touch screen to begin with. This comes in handy when your hands are damp, or you’re wearing gloves. On the left side of the watch you get a back button and on the right side you get context-sensitive top and bottom buttons. Each button is attached to a short cut for easy navigation. Press and hold the back button for :02 and you launch Fibit Pay (more on that later), press and hold the top button and you get music controls, press and hold the bottom button and you can scroll through notifications.

The Ionic has quite a few sensors built into it which will help you gather all of those fitness metrics you’re probably interested in if you’re buying this. Built into the device are:
3-axis accelerometer
3-axis gyroscope
Optical heart rate monitor
Altimeter
Ambient light sensor
Vibration motor
WiFi antenna (802.11 b/g/n)
GPS
NFC (for payments)

Other than the heart rate monitor on the underside, that’s pretty much it when it comes to the hardware. But, in my opinion, it’s Fitibit’s software which makes the product as compelling as it is. It is the Fitbit app, which works on both Android and iOS, that makes Fitbit one of the most compelling fitness trackers on the market. We’ll touch on that in a bit. The software on the watch itself enables you to do a lot. The Ionic is still a fitness product first, smartwatch second, but it’s a very close second and probably one of the best implementations of a smartwatch on the market- though admittedly, I’d like to see a large, round watch case something along the lines of a Nixon. I understand though why rectangular works better for these displays.

The main screen of the Ionic is the watch face. You get several options for choosing different watch faces, and ultimately endless options in that the watch faces can be customized. Fitbit has opened up their ecosystem to developers, so you can actually make your own watch faces if you have the time and inclination. But it doesn’t stop there! Developers can now make apps for Fitbit, so in the future you may see more options (ahem, a “smart alarm” to wake me when I’m in a light sleep phase) for apps to support your fit lifestyle, or time wasting.

From the main screen, you’ll see your notifications pop up, or swipe up to access them on demand. You’ll also see music controls appear as well. Swipe left to right to see battery life and a couple other items. Swipe right to left to get to the other apps. Notifications is one area where the smartwatch second paradigm is evident. Though the text and icons are vivid and easily readable you can’t interact with the notifications, other than reading them. No shortcut responses, no voice dictation, just the notification. That’s also the compromise when you have a device and service which work well across all platforms. Other than shortcuts though, most of the time I interact with notifications on Apple Watch or Android Wear devices, I’m doing so from the phone itself. I really have little desire to type or communicate for anything longer than short replies from the watch. It isn’t the most elegant method of doing so. For my use, the Ionic’s limitations with notifications are not very limiting.

Other apps of note, directly on the watch are the Coaching app, Pandora, and Wallet. One of the bright spots of the Fitbit Ionic, which sets it apart from other smartwatches is the guided workouts. On competing devices you’re going to have to add something like these as third-party apps but Fitbit’s purchase of FitStar a while back has given them a great tool for casual or beginning fitness enthusiasts who want some of the benefits of having a personal trainer right from their wrist. The Coaching app shows you great video “how-to’s”, gives you time to see them prior to engaging in the movement, then times you through the movement. It really is a solid tool but comes with only three routines to start. If you want more, you’ll have to pay for premium content through the FitStar FitBit Coach app that is available for iOS and Android. The Pandora app is another great addition for those who use the service, or those who would like to leave the phone at home or in a locker during a workout or run. You can now sync a Pandora playlist directly to the watch and listen without the need for a phone, once you’ve paired your bluetooth headphones to the watch itself. If you don’t want to go the Pandora route, it’s good to know the watch has 2.5Gb of storage so you can transfer around 300 songs directly to the watch and listen that way. Fitbit now has their own Wallet app so that you can pay for things directly from the watch itself, now that the device has NFC. Of course your bank has to support Fitbit’s pay system. And, if you’re worried about security on the watch itself, you’ll have to set a device PIN in order to use Fitbit Pay. What this does is lock your watch whenever it’s removed from your wrist, requiring the PIN to be entered once you put the watch back on. For those of you who only need to feed your caffeine addiction and won’t require Fitbit Pay because Starbucks is your “pusher,” you get the Starbucks app. Just use the app on your phone to sign into your Starbucks account and connect to your card and you’re good to go. Now when you walk into Starbucks you just tap the app on your watch, which brings up the barcode, scan that puppy and you’re on your way to that buzz you’ve been fiending for.

What makes the Ionic one of the best devices for those whose primary use case is fitness tracking is the battery life, automatic fitness tracking, and the social features built into the mobile app. In the world of fitness trackers and smartwatches, the battery life of the Ionic is Herculean. I regularly get four to five days out of the watch. By comparison, I get only a day, maybe a day and a half out of the Apple watch, and two to three days at best from Samsung’s Gear S3. You can set the Fitbit to automatically recognize when you are exercising and it’s pretty darn accurate. It will recognize that you’re active, then categorize that activity. That’s helpful when you’re trying to win that Workweek Hustle challenge! My favorite aspect of the Fitbit ecosystem is actually the mobile app. It’s clearly laid out with the ability to customize the tiles you see on the homescreen. It’s intuitive, bright, and fun. And best of all, it’s social sharing and community features are bar none in this space. I have quite a few friends who are Fitbit users and we all sign on to different group challenges regularly. Workweek Hustle is one of the most common ones for us. It’s a challenge to see who can complete a certain amount of steps for the week. There’s also a Workday Hustle and weekend challenges, and they’re all pretty effective. You get reminders and updates throughout the day regarding those challenges and they really keep you honest if you allow them. From those reminder and update screens you can actually talk trash or cheer for your pals’ progress.

With regard to the user experience, this is in my opinion, the best fitness smartwatch on the market. When you couple the outstanding battery life with the excellent community features of the actual Fitbit app itself, the question you&rsquo;re left with is what do you really want in your wearable? Are you looking for the kind of device integration that a traditional smartwatch like an Apple Watch or Huawei watch, or Samsung watch gives you? Or is fitness your primary objective? If it's the latter, and you don't have the disposable income to buy both a fitness tracker AND smartwatch, the best all-around product for most people is the Fitbit Ionic. And, like I stated previously, if you want to dress the watch up you can just hit Amazon and you'll find some great leather, loop, and link bands there.

Disclosure: Fitbit provided me with a demo unit for the purpose of this review.