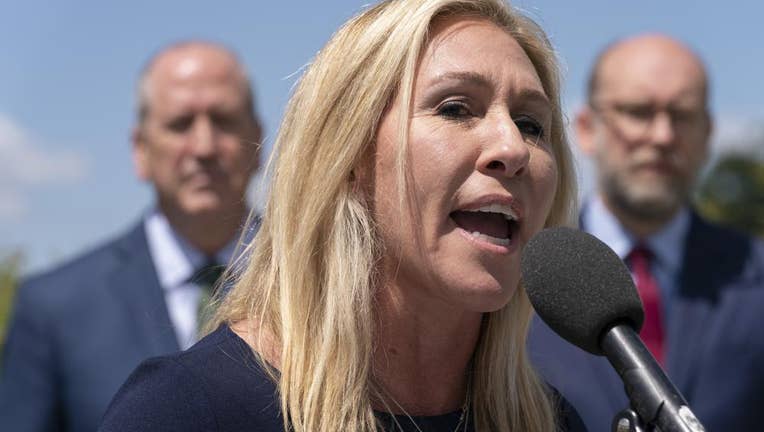 Rep. Marjorie Taylor Greene, R-Ga., speaks during a news conference, Wednesday, May 12, 2021, with Rep. Dan Bishop, R-N.C., back left, and former OMB Director and President of Citizens for Renewing America Russ Vought, as they express their oppositio

WASHINGTON (AP) - A year before her election to Congress, Marjorie Taylor Greene searched for Rep. Alexandria Ocasio-Cortez at her Capitol office, taunting the New York Democrat to "get rid of your diaper" and "talk to the American citizens," as shown in video unearthed by CNN.

"I am an American citizen. I pay your salary through the taxes that you collect from me through the IRS," Greene says through the mail slot of a locked door. "I am a woman. I am a female business owner and I’m proud to be an American woman. And I do not support your socialist policies."

The Georgia Republican continued: "If you want to be a big girl, you need to get rid of your diaper and come out and be able to talk to the American citizens." Two men appear along with her in the video, also mocking Ocasio-Cortez and her staff through the mail slot.

The release of the since-deleted video, which was initially broadcast in February 2019 on Facebook Live, came the same week that Greene followed Ocasio-Cortez off the House floor, shouting that the Democrat supported "terrorists" and doesn’t "care about the American people," as first reported by The Washington Post. She has been challenging Ocasio-Cortez to a debate on Twitter, entreaties that Ocasio-Cortez had been ignoring.

Asked Friday about the "context" of the 2019 video, Greene told reporters, "Walking around and talking to members of Congress who serve the taxpayers that, now we’ve got taxpayers aren’t even allowed to come talk to us, that’s the context."

The incidents add to a portrait of the activist-turned-lawmaker who has shown little interest in governing, but has instead used her platform to float conspiracy theories, push Donald Trump’s false claims about a stolen 2020 election and further her own notoriety. Her combativeness toward colleagues has only grown after an unprecedented rebuke where the House stripped her of committee assignments, effectively ending her ability to shape legislation.

Another confrontation Friday involved a member of her staff.

Rep. Eric Swalwell said a staffer for Greene yelled at him to take his mask off after stepping off the House floor, an unusual of breach of decorum. Though the CDC has relaxed mask-wearing guidelines for those who have been vaccinated, many lawmakers continue to wear them, and they are still required on the House floor.

"I had a mask on as I stepped off the Floor. An aide with @mtgreenee yelled at me to take my mask off. No one should be bullied for wearing a mask,"′ Swalwell tweeted. "So I told the bully what I thought of his order."

On Twitter Friday, Greene said she had witnessed the confrontation and claimed, "No one yelled."

Greene’s behavior has alarmed some members of Congress, where feelings remain raw after the deadly Jan. 6 storming of the Capitol by a mob of Trump supporters intent on overturning the outcome of the 2020 election.

"This is a woman that’s deeply unwell and clearly needs some help," Ocasio-Cortez told reporters Friday. "Her kind of fixation has lasted for several years now" and the "depth of that unwellness has raised concerns for other members, as well."

House Speaker Nancy Pelosi said Greene’s behavior was "beyond the pale" and raised the possibility of an ethics investigation.

"This is beneath the dignity of a person serving in the Congress of the United States and is a cause for trauma, and fear among members, especially on the heels of an insurrection," Pelosi said Thursday..

Yet so far, Republicans have shown little appetite for punishing Greene. They rallied around her in February after some of her past comments came to light, including her endorsement of calls to assassinate leading Democrats. That left it to Democrats, who were joined by 11 Republicans, in voting to strip her of her committee assignments.

As a congressional candidate, Greene posted a photo in 2020 of herself with a gun next to images of Ocasio-Cortez and fellow Democratic Reps. Ilhan Omar of Minnesota and Rashida Tlaib of Michigan.

Before her election, she also supported Facebook posts that advocated violence against Democrats and the FBI. One suggested shooting Pelosi in the head. In response to a post raising the prospect of hanging former President Barack Obama, Greene responded that the "stage is being set."

In one 2018 Facebook posts, she speculated that "lasers or blue beams of light" controlled by a left-wing cabal tied to a powerful Jewish family could have been responsible for sparking California wildfires.

And in February 2019, Greene appeared in an another online video filmed at the U.S. Capitol, arguing that Omar and Tlaib weren’t "really official" members of Congress because they didn’t take the oath of office on the Bible. Both women are Muslim.