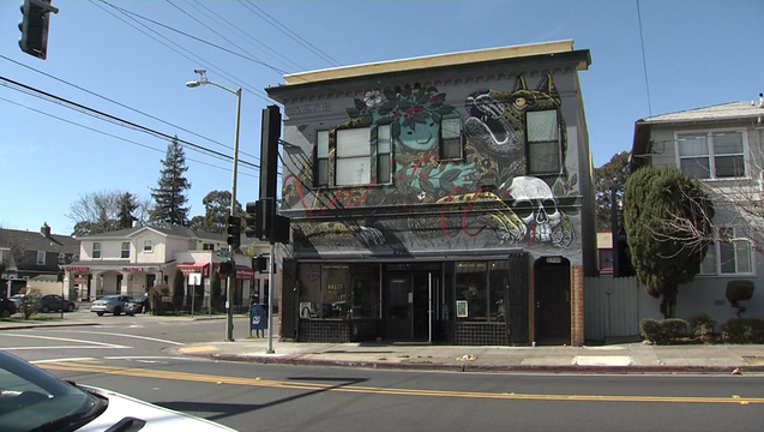 OAKLAND, Calif. - Self-described patriots toting American flags descended on a controversial coffee shop that won't serve police officers in Oakland on Sunday morning, shouting at customers patronizing the shop. And then the group moved over to a farmer's market  to protest the mayor for warning the public about the ICE raids last month.

Lindsay Grathwohl, 39, of San Lorenzo was the organizer of the two events; the first at Hasta Muerte coffee shop on Fruitvale Avenue and the second at Mayor Libby Schaaf's "mobile mayor" event at the farmer's market in Rockridge.

Earlier this month, KTVU broke the story that the shop is refusing to serve police officers, which drew both praise and criticism from a divided community.

Grathwhol's father was an FBI informant and she told KTVU she holds a deep respect for men and women in blue. "We support police officers," she said, "and we think a boycott isn't cool."

She said she and others were "peacefully protesting" outside the shop when "we were attacked. Someone grabbed my flag." She said people started hitting people in her group.

Michael Roecklein said police came to break up a fight when 30 people from the neighborhood came out to protest the shop, and protesters got into their SUVS and drove away. He said all the commotion was actually drawing more love and support for the shop.

East Bay Express reporter Darwin BondGraham described the protesters as being on the "far right" and said they allegedly maces several people defending the cafe.

The scene definitely was vocal and heated. Patriot Will Johnson shouted that the problems of the world begin with "liberalism" and that "things will be OK because Trump is president," while others on the lfeft counter-chanted "Nazis out! Nazi's out!"

After the coffee shop, the group moved to the farmer's market behind the Department of Motor Vehicles in Rockridge. Mayor's spokesman Justin Berton said the mayor took time to actually meet with several of the patriots and shake their hands.

"The mayor is proud to live in a country where everyone has the right to speak their truth and residents have the right to question their elected officials," he said. "Today's interactions were respectful and she appreciated everyone who took the time to engage in thoughtful discussion."