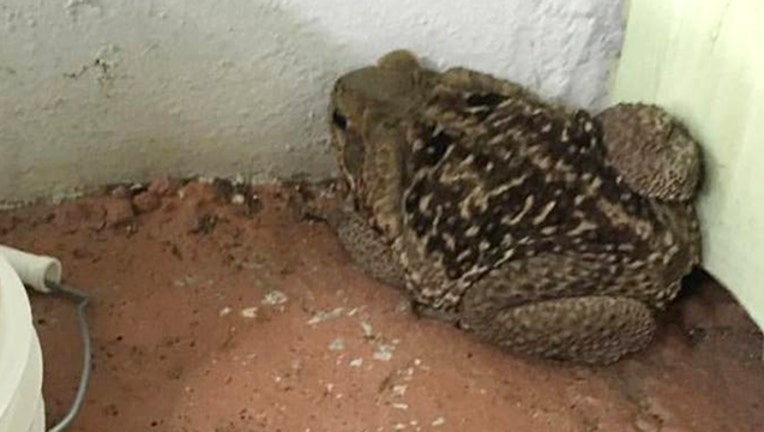 TAMPA (FOX 13) - Native Floridians know the state's wildlife can pose various challenges, especially when it comes to domestic pets. And with summer comes the challenge of keeping pets away from the poisonous Bufo toad, also known as a Marine or Cane toad.

The especially large toads are non-native to Florida, being brought to the U.S. and released into sugar cane fields to help control pests, and later became prevalent in the sunshine state after about 100 of the toad were released from the stock of a pet dealer at the Miami airport in 1955, according to the University of Florida Wildlife Extension.

Bufo toads secrete a poisonous toxin from the glands above their eyes. If a cat or dog tries to bite down on one, the poison will cause pain, profuse salivation and possibly death, if not treated right away.

Vets recommend, anyone who suspects an animal has ingested poison of a Bufo toad, rinse its mouth with water for up to 15 minutes, and call your vet if symptoms do not subside afterward.

The Bufo toad's poison is not deadly for humans, but can irritate the skin, or burn if it gets into a person's eyes.

Bufo toads do not have any natural predators in the U.S., so if there's one hanging around the house, it's likely to stay there. FWC officials said, anyone who wants to eliminate a Bufo toad from their property should consider calling a trapper. FWC said the toads can also be humanely euthanized by putting oral pain relief gel on the its stomach, which will make it sleepy, then putting it in a bag and into the freezer.