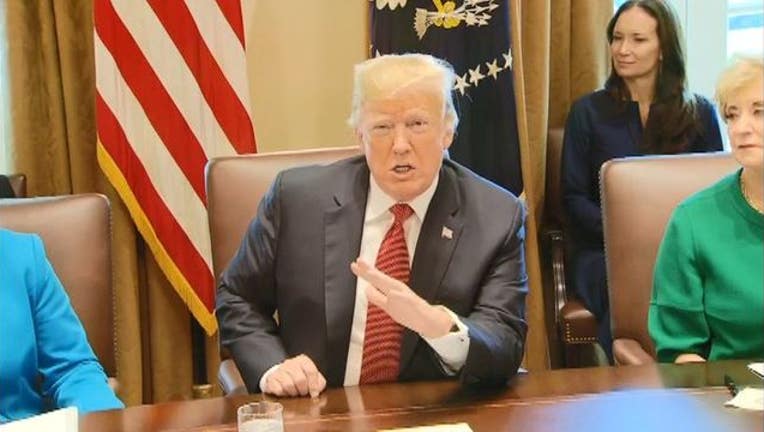 WASHINGTON (KTVU) - President Trump spoke from the White House Wednesday about the California wildfires. In his statement President Trump said, "what's happening should never happen," and that "California needs to get its act together." He also threatened to stop sending unspecified funding to California for wildfires.

In his full comments President Trump said, "California is a mess. We're giving billions and billions of dollars for forest fires in California. There's no reason for those fires to be like they are. They're leaving them dirty. It's a disgraceful thing. Oak trees are sitting there rotting and dry. And instead of cleaning it up, they don't touch them. They leave them. And we end up with these massive fires that we're paying hundreds of billions of dollars for to fix and the destruction is incredible. So I think California ought to get their act together and clean up their forests and manage their forests because its disgraceful. What's happening should never happen. I go all over the country and I meet with governors and the first thing they say is there's no reason for forest fires in California  that in California. So I say to the governor or whoever is going to be the governor of California, you better get your act together. Because California, we're just not going to continue to pay the kind of money we're paying because of fires. It should never be to the extent. They were telling me in a couple of states. I won't even mention their name. It's like a flash, some grass will burn, it will be over in minutes. They'll lose two acres - three acres. At the most. They won't even lose that. And here we are with thousands of acres and billions and billions of dollars every year - it's the same thing every year. And they don't want to clean up their forest because they have environmental problems in cleaning it up. It should be the opposite. Cause you will lose your forest, you'll lose it. But it's costing our country hundreds of billions of dollars because of incompetence in California. So, I'm speaking now for the people of California. They don't want to see this happen. They're getting destroyed and it's hurting our budgets, it's hurting our country - and they just better get their act together."

The comments come several months after President Trump Tweeted, "California wildfires are being magnified and made so much worse by the bad environmental laws which aren’t allowing massive amounts of readily available water to be properly utilized. It is being diverted into the Pacific Ocean. Must also tree clear to stop fire from spreading!"

At the time, experts disputed President's claims  that the state is diverting water that could be used to fight the fires, into the ocean.

He later added in a second tweet, "Governor Jerry Brown must allow the Free Flow of the vast amounts of water coming from the North and foolishly being diverted into the Pacific Ocean. Can be used for fires, farming and everything else. Think of California with plenty of Water - Nice! Fast Federal govt. approvals."

But from the fires' front lines crews said there was no shortage of water.

Environmental experts said the real water controversy was about something else entirely.

"We have plenty of water in California to fight fires. There's no doubt about that," said Eugene Cordero a climate science professor at San Jose State University. "The question is what happens to the water that comes down from the Sierras and that's something we've been fighting about and arguing about for many decades," Cordero added.

He also said, right now in California some water goes to residents, some to farmers, and some to protecting the environment and fish like the Delta smelt. Read the full story here.