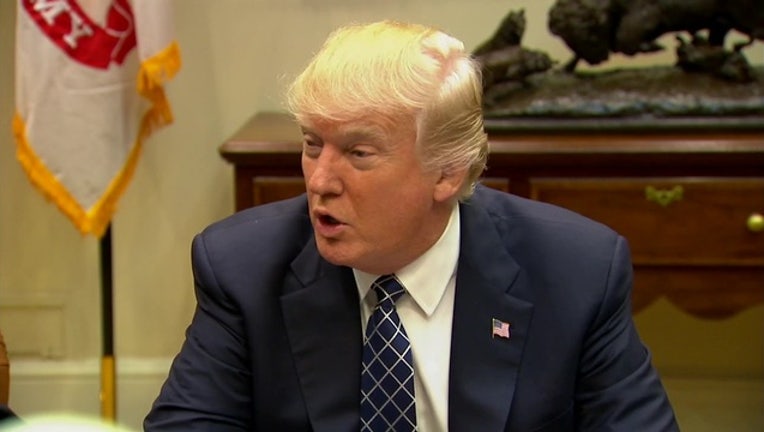 WASHINGTON (AP) - President Donald Trump will press Palestinian leader Mahmoud Abbas on Wednesday to end payments to families of Palestinians imprisoned in Israeli jails, according to U.S. officials, one of several actions Washington believes could lead to resumed peace talks with Israel.

Other actions include an end to what Israel calls anti-Israel rhetoric and incitement of violence, said officials familiar with planning for the meeting. It will be Trump and Abbas' first face-to-face discussion.

The issue of stipends for families of Palestinians killed or jailed in the context of the conflict with Israel is sensitive. Israel considers such payments a reward for terrorists, but stopping them seems untenable to Abbas, especially at a time of broad Palestinian support for a mass hunger strike of prisoners held by Israel. American officials said such a request was raised in preparatory talks with Palestinian officials and three Republican senators urged a halt to such payments in a letter to Trump that reflected widespread opinion in Congress.

While Abbas will be challenged on the payments, Trump will also use their meeting to recommit the United States to helping the Palestinians improve their economic conditions, said the U.S. officials, who weren't authorized to publicly preview the talks and demanded anonymity. They said Trump will reiterate his belief that Israeli settlement construction on land claimed by the Palestinians does not advance peace prospects.

The peace process has been stalled since 2014 when former Secretary of State John Kerry's effort to lead the sides into peace talks collapsed. Since then, there have been no serious attempts to get negotiations restarted. The Obama administration spent its last months in office attempting to preserve conditions for an eventual resumption.

"We hope this will be a new beginning," Abbas told Palestinians at a meeting in Washington on the eve of the talks.

He blamed the lack of dialogue in recent years on the Israeli government, saying its leaders "have no political vision," and reiterated his demands for an independent Palestinian state along pre-1967 lines, with east Jerusalem as its capital.

"Without this we will not accept any solution," said Abbas, who touted an Arab League peace plan that offers Israel diplomatic relations with the Muslim world for a Palestinian state. "There is no alternative."

Abbas is hamstrung by the fact that his Palestinian Authority does not control all Palestinian territory, since the militant Hamas movement seized control in the Gaza Strip in 2007.

Shortly before the White House meeting, a senior Palestinian official said Abbas would stop paying for electricity in Gaza and "dry up" the flow of funds to Hamas. Hamas accuses Abbas' government of irresponsible behavior and warns the cuts would be disastrous for Gaza's 2 million residents.

In his Wednesday comments, Abbas also criticized ideas for a "one state" peace agreement, saying it could mean "racial discrimination" or an apartheid-like system. Left unspoken was the apparent reference to Trump.

In a February news conference with Netanyahu, Trump broke with longtime U.S. policy by raising the one-state idea and withholding clear support for an independent Palestine, though officials quickly stressed he would support any arrangement agreed by the two sides.

Another contentious issue: Trump's campaign promise to move the U.S. Embassy in Israel from Tel Aviv to Jerusalem. The symbolic relocation would essentially recognize Jerusalem as Israel's capital. Abbas and other Arab leaders have said doing so would inflame already simmering tensions.

Since taking office, Trump has backed away from the pledge while saying he's still discussing it. On Tuesday, Vice President Mike Pence said the White House was giving "serious consideration" to the idea.

In lieu of moving the embassy, some in the administration had floated the idea of the new U.S. ambassador to Israel, David Friedman, living in Jerusalem instead of the official residence in a Tel Aviv suburb. Officials now say Friedman, who is expected to take up his post next week, will live at the residence.

Pence also said Trump was making progress toward peace, though he didn't elaborate. He stressed that Israel's interests would be protected.

"Thanks to the president's tireless leadership, momentum is building and good will is growing," Pence said at an event commemorating the anniversary of Israeli independence. "And while there will undoubtedly have to be compromises, you can rest assured: President Donald Trump will never comprise the safety and security of the Jewish state of Israel. Not now, not ever."