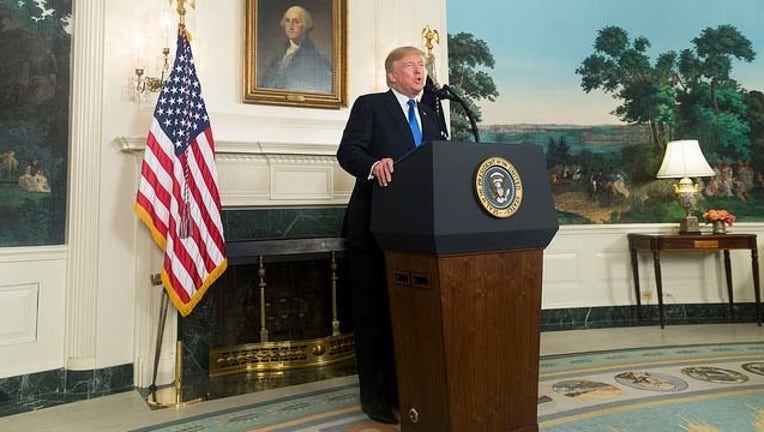 WASHINGTON - (AP) -- The Trump administration readied a plan Tuesday to send billions in emergency aid to farmers who have been caught in the crossfire of President Donald Trump's trade disputes with China and other U.S. trading partners.

The Agriculture Department was expected to announce the proposal that would include direct assistance and other temporary relief for farmers, according to two people briefed on the plan, who were not authorized to speak on the record.

The plan comes as President Donald Trump is scheduled to speak at the Veterans of Foreign Wars national convention in Kansas City in the heart of the nation's farm country.

Trump declared earlier Tuesday that "Tariffs are the greatest!" and threatened to impose additional penalties on U.S. trading partners as he prepared for negotiations with European officials at the White House.

The Trump administration has slapped tariffs on $34 billion in Chinese goods in a dispute over Beijing's high-tech industrial policies. China has retaliated with duties on soybeans and pork, affecting Midwest farmers in a region of the country that supported the president in his 2016 campaign.

Trump has threatened to place tariffs on up to $500 billion in products imported from China, a move that would dramatically ratchet up the stakes in the trade dispute involving the globe's biggest economies.

Before departing for Kansas City, Trump tweeted that U.S. trade partners need to either negotiate a "fair deal, or it gets hit with Tariffs. It's as simple as that."

The president has engaged in hard-line trading negotiations with China, Canada and European nations, seeking to renegotiate trade agreements he says have undermined the nation's manufacturing base and led to a wave of job losses in recent decades.

The imposition of punishing tariffs on imported goods has been a favored tactic by Trump, but it has prompted U.S. trading partners to retaliate, creating risks for the economy.

Trump has placed tariffs on imported steel and aluminum, saying they pose a threat to U.S. national security, an argument that allies such as the European Union and Canada reject. He has also threatened to slap tariffs on imported cars, trucks and auto parts, potentially targeting imports that last year totaled $335 billion.

During a Monday event at the White House featuring American-made goods, Trump displayed a green hat that read, "Make Our Farmers Great Again."

"We're stopping the barriers to other countries. They send them in and take advantage of us," Trump said. "This is the way it's going to go -- make our farmers great again."

The president is meeting with European Commission President Jean-Claude Juncker on Wednesday. The U.S. and European allies have been at odds over the president's tariffs on steel imports and are meeting as the trade dispute threatens to spread to automobile production.