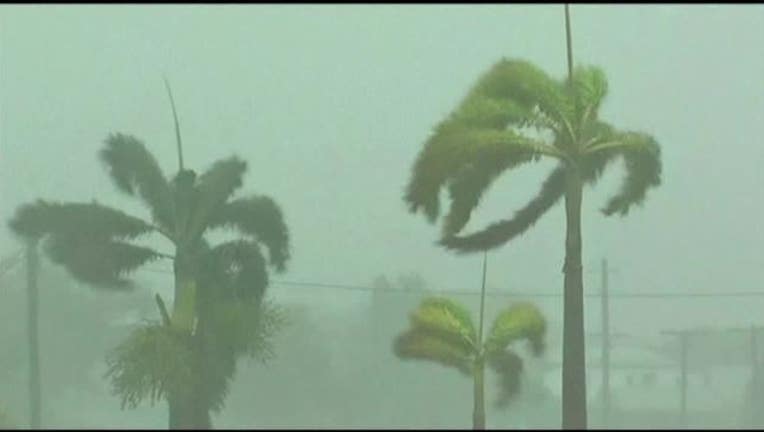 TOWNSVILLE, Australia (AP) - A powerful cyclone packing winds of up to 260 kilometers (160 miles) per hour roared across Australia's tropical northeast on Tuesday, uprooting trees, tearing down fences and knocking out power to thousands, officials said.

Cyclone Debbie, which slammed into the coast of Queensland state as a fierce Category 4 storm, quickly began to weaken after making landfall near the resort town of Airlie Beach, the Australian Bureau of Meteorology said. By Tuesday night, it had been downgraded to a Category 2 storm, with wind gusting up to 155 kilometers (95 miles) per hour.

One man was injured after a wall collapsed in Proserpine, a town south of Airlie Beach, Queensland Police Commissioner Ian Stewart said. The man was taken to a hospital, where he was in stable condition.

The extent of the damage from the storm was not known as night fell across the region, but there were reports of roofs peeling from homes, fences crumbling and trees snapping in half. The idyllic Whitsunday Islands, a popular tourist destination, were hit particularly hard, with one recorded wind gust of 263 kilometers (163 miles) per hour, the meteorology bureau reported.

The slow-moving storm pounded the coastal region for hours, creating what Stewart called a "battering ram effect," with the same areas enduring the howling winds and drenching rains for a punishingly long time.

Communities along more than 300 kilometers (190 miles) of coastline were expected to be impacted, Stewart said.

John Collins, a member of the Whitsundays government council, was sheltering from the storm with his wife and four daughters inside their house in Proserpine. He could see that four of his neighbors' sheds had been destroyed and every house within sight - including his own - had lost their fences. At least four trees had been smashed to pieces.

"It sounds like you got a jumbo jet sitting on the roof of your house," Collins said by telephone of the wind roaring outside. "It really is so loud. It's incredible."

Collins' wife and two of their daughters were so scared they were hiding under blankets. Meanwhile, one of his other daughters - whom he described as "a real weather nerd" - was enthralled with the storm, and was diligently listening to the radio for updates on its path. The family's power had been out since Tuesday morning, and they were resigned to several more hours of waiting until it was safe to emerge from their house.

Thousands of people evacuated low-lying areas in the storm's path on Monday. Hundreds of schools were closed on Tuesday and more than 50,000 households were without power.

"Conditions have deteriorated rapidly," Australian Prime Minister Malcolm Turnbull said in an address to Parliament. "Take care and stay safe. Be prepared to shelter in place until Wednesday."

The storm also poses a serious threat to the farming region's crops. The area produces sugarcane and a wide range of fruits and vegetables, including tomatoes, mangoes and peppers.