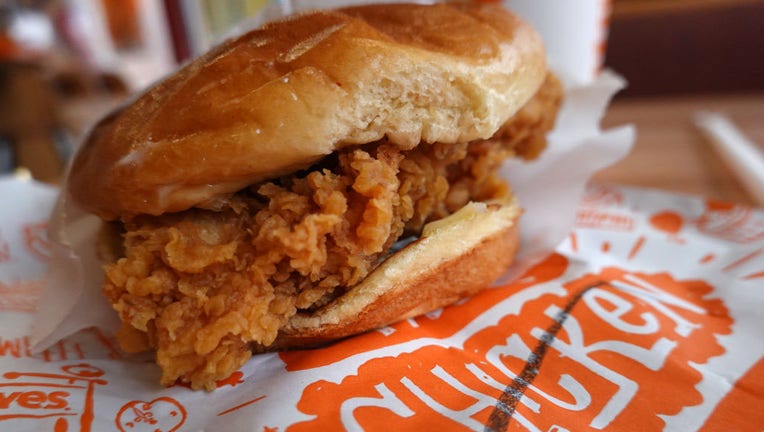 FILE - A chicken sandwich from Popeyes Louisiana Kitchen is shown on May 6, 2021, in Chicago, Illinois. (Photo Illustration by Scott Olson/Getty Images)

Popeyes is celebrating National Fried Chicken Sandwich Day by giving away a chicken sandwich as part of a buy-one-get-one deal.

Customers who purchase a Chicken Sandwich Combo — Classic or Spicy — can get a classic or spicy chicken sandwich for free at participating U.S. locations, the chain said.

The deal, which is available through the Popeyes mobile app or on Popeyes.com, began on Nov. 3 (National Sandwich Day) and lasts through Nov. 9 (National Fried Chicken Sandwich Day).

Popeyes debuted its first fried chicken sandwich in August 2019 as a competitor to Chick-fil-A’s famous sandwich, which escalated into a Twitter battle and ultimately led to the Popeyes sandwich becoming wildly popular and even selling out for a period of time.

The history of Chick-fil-A

Chick-fil-A, one of the largest family-owned restaurant chains in the U.S., rose from humble beginnings as a small diner in a suburb of Atlanta.

Popeyes first opened in 1972 in New Orleans, Louisiana. Originally called "Chicken on the Run," it was later reopened as Popeyes — selling spicy, New Orleans-style chicken. Its first franchise restaurant opened in 1976 and today, there are over 2,800 locations across the U.S., alone.

Popeyes, which is now headquartered in Miami, Florida, has since become a subsidiary of the Toronto-based Restaurant Brands International that also owns Tim Horton’s, Burger King, and Firehouse Subs.

Last month, the fried chicken chain said its annual Cajun-Style Turkey is available for delivery for the first time ever ahead of Thanksgiving 2022.