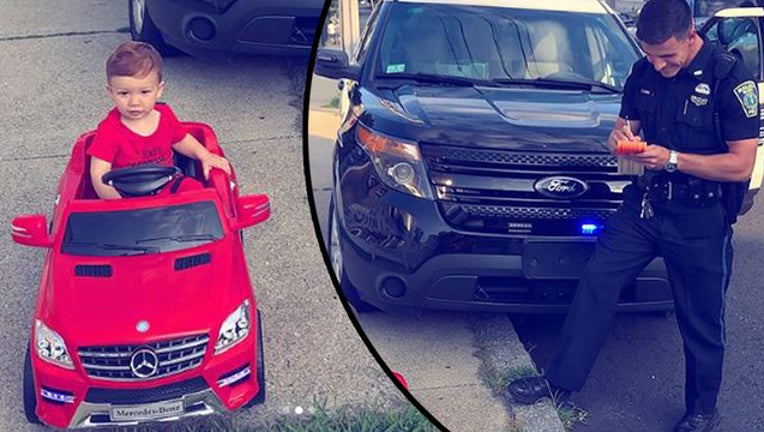 MALDEN, Mass. (AP) - A 1-year-old motorist has been pulled over for driving without a license - but he got off with a "cuteness warning."

Police in the Boston suburb of Malden say they staged the traffic stop Tuesday afternoon after spotting Grayson Salerno driving a red toy Mercedes convertible along a sidewalk.

An officer pulled his cruiser behind Grayson, switched on the blue flashing lights and pretended to write a ticket. Grayson's mother, Cori Salerno, says she's tickled the mock misdemeanor has made so many people smile.

Cori told WHDH they were in the area for a family get-together and ran into an officer they knew. Cori said her sister-in-law came up with the photo-op idea.

“It’s a little remote control car, so we just drove him out to the sidewalk and my husband said ‘pretend to give him a ticket,'” she told the outlet. “He’s so sweet. He just went along with it.”

It's doubtful the young offender understands the charge. He was wearing a T-shirt with the inscription: "I have literally no idea what you are saying."