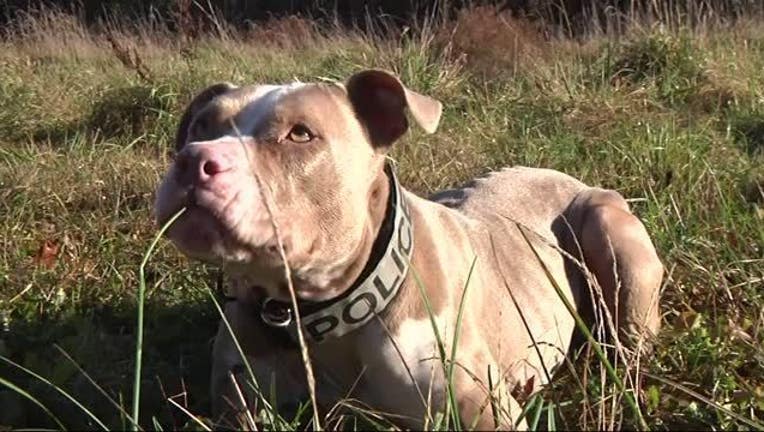 STONE RIDGE, N.Y. (AP) — The new rookie at one New York police department weighs 60 pounds, has a big, lolling tongue, a soft caramel coat and a chance to fight stereotypes in addition to crime.

When she graduates Friday from K9 training school, Kiah will be one of just a few pit bulls to serve as a police dog. It's a job usually given to breeds that don't come with the pit bull's reputation — deserved or not — as a savage animal fit only for the company of criminals.

"The breed isn't important," said Brad Croft, who trains dogs for law enforcement and the military and found Kiah in a Texas animal shelter after her previous owner was arrested for animal cruelty. "It's what's inside of the dog that's important."

German shepherds and Belgian Malinois are most commonly employed as police and military dogs, trained to chase and detain suspects or find drugs, cadavers and missing people. Beagles, collies, retrievers and bloodhounds are also used. Pit bull police dogs are almost unheard of.

Kiah (pronounced KY'-uh) will be a sniffer for the Poughkeepsie Police Department, used to detect drugs and track missing people. She's also a goodwill ambassador, for her breed and for the police.

Croft often visits animal shelters looking for abandoned dogs that he thinks would make good police dogs. He selected Kiah after a worker at the shelter recognized something special in the dog.

Kiah was given to the department at no cost thanks to a partnership between Croft's company, San Antonio-based Universal K9, an Austin animal shelter and Animal Farm Foundation, a nonprofit based in New York's Dutchess County that works to ensure "equal treatment and opportunity" for pit bulls.

Despite frightening stories from around the country — a 9-year-old girl was fatally attacked by a pit bull this month on Long Island — advocates say the breed's reputation for violence is undeserved, the result of the breed's use in dogfighting and as a status symbol for gang leaders.

Bernice Clifford, Animal Farm's director of training, noted that the term "pit bull" itself is misleading, since it is often applied to any dog with a muscular frame and block-shaped head. As a result, she said, many are condemned to shelters and euthanasia simply because they were labeled a pit bull.

According to the American Society for the Prevention of Cruelty to Animals, there is no evidence that laws banning particular breeds reduce dog attacks. A 2014 report from the Animals and Society Institute reviewed several years of data on fatal dog bites and found no correlation between dog attacks and breeds.

There's also little connection between a dog's breed and their aptitude for police work, according to George Carlson, the Ulster County sheriff's deputy who trained Kiah in Stone Ridge, New York. He said a dog's drive, energy and eagerness to please are more important factors.

Kiah is the only pit bull police dog that he's heard of on the East Coast, Carlson said. He calls her a "sweetheart" and expects her to excel in her new job.

"Dogs are individuals," he said. "They have their own personalities, just like people. And I'd rather train dogs than people."