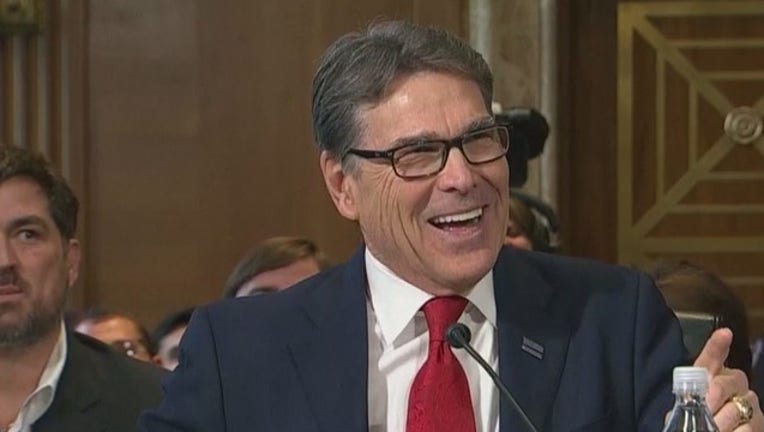 In an op-ed submitted to the Houston Chronicle, the former Texas governor suggested that his alma mater's first openly gay president may have stolen the outcome. Perry wrote that the campus election "at best made a mockery of due process and transparency" and at worst "allowed an election to be stolen outright."

"It is difficult to escape the perception that this quest for 'diversity' is the real reason the election outcome was overturned," he wrote. "Does the principle of 'diversity' override and supersede all other values of our Aggie Honor Code?"

Those who know Perry best said they're not surprised that he would take the unusual step of weighing in on a parochial issue at his alma mater - even though he's now a member of President Donald Trump's Cabinet.

"There are three institutions that are most important to Rick Perry, his wife and family, the U.S. military and Texas A&M. It depended on the day, or the weekend, which one had the top priority," said Ray Sullivan, a former Perry chief of staff and veteran of the ex-governor's unsuccessful presidential runs in 2012 and 2016.

The campus election ended with junior economics major Bobby Brooks winning about 4,200 votes. Another candidate, Robert McIntosh, son of Dallas-based GOP fundraiser Alison McIntosh, got nearly 5,000 but was disqualified amid complaints he intimidated voters and failed to provide receipts for glow sticks used in an online campaign video.

McIntosh appealed to a student court, which dismissed charges of voter fraud but upheld those of incomplete financial disclosure, awarding the election to Brooks this week.

Brooks takes office next month but has declined to comment since the publication of Perry's op-ed. He posted on Facebook after being declared election winner, though: "To those of you who spoke poorly about me based upon my sexual orientation or personal religion (and talk gets around, my friends), I forgive you. I really do."

Perry is following in the footsteps of his new boss, though on a far smaller scale. Trump spent months claiming without any evidence, that his presidential election against Democrat Hilary Clinton would be rigged against him - until he won it.

A Texas A&M spokeswoman did not return messages seeking comment Thursday. Energy Department Spokesman Bob Haus said Perry "did this is in his personal capacity and DOE has no official comment on this op-ed."

A 1972 A&M graduate with a degree in animal sciences, Perry was twice elected yell leader, a coveted role akin to a male cheerleader. He was Texas' longest-serving governor from 2000 until 2015, then moved to a home he built in rural Round Top, Texas, near his alma mater's campus in College Station.

Perry took an active role in A&M policy as governor, pushing the school to implement a plan devised by a conservative Texas think tank seeking greater scrutiny on faculty productivity that university officials charged put ideology ahead of academics. He also helped place close allies in key school positions - including one who brandished a pocket knife as the university discussed his firing. Current A&M University System Chancellor John Sharp was once Perry's roommate.

Perry also has previously been outspoken about what he branded political correctness run wild when it came to another institution near and dear to his heart, the Boy Scouts of America. An Eagle Scout, Perry wrote the 2008 book "On My Honor: Why the American Values of the Boy Scouts Are Worth Fighting For." In it, he questioned whether sexual preference is determined at birth or is a matter of personal choice, while noting he doesn't believe in "condemning homosexuals that I know personally."

As recently as four years ago, Perry said he hoped the organization wouldn't change its then-longstanding policy prohibiting gay membership, saying the Scouts continue "to be under attack from the forces of secularism" and that "to have popular culture impact 100 years of their standards is inappropriate."

The organization has since reversed course, allowing openly gay members and lifting a ban on openly gay Scout leaders. In January, it announced it would allow transgender boys to join. Perry remained silent about the latest change, though he was at the time facing Senate confirmation to become Trump's energy secretary.

Sarah Kate Ellis, president and CEO of the gay rights group GLAAD, responded to Perry's accusations via Twitter saying, "Some advice for @SecretaryPerry: Kids like Bobby Brooks are the future, and should be encouraged, not harassed."

But Sullivan said Perry's op-ed may actually raise the energy secretary's standing with Trump given the president's criticism of too much political correctness on university campuses.

"I'm sure it will pique interest in Washington," Sullivan said. "But given the curious circumstances of the election and general concern about the state of free speech and political correctness on American campuses, it is not outside the bounds of normal political and public policy discussion."