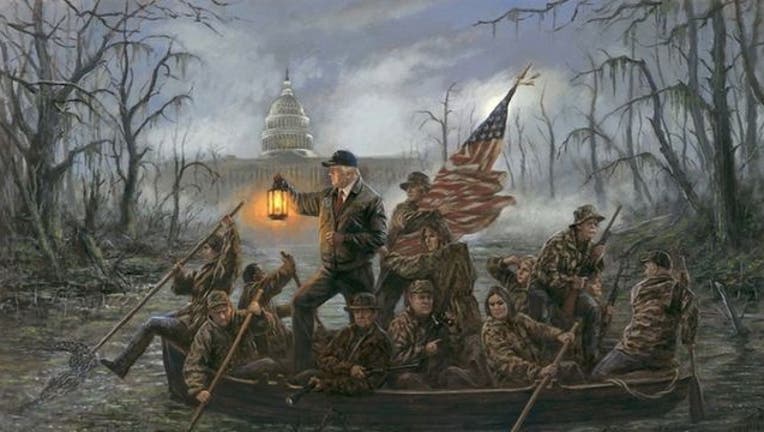 Jon McNaughton's "Crossing the Swamp" is a riff on the classic "Washington Crossing the Delaware," but replacing George Washington's crew with members of President Trump's administration. (Jon McNaughton, jonmcnaughton.com)

(FOX NEWS) - Maybe it's John Bolton clutching a gun. Maybe it's Mike Pompeo setting down his binoculars to stare into the distance. Maybe it's the gators.

But a newly unveiled painting meant to depict President Trump and his team navigating the Washington "swamp" has something for everyone.

Utah-based artist Jon McNaughton touched off a social media frenzy as he shared his painting, “Crossing the Swamp,” Tuesday on Twitter. The painting is a riff on the classic “Washington Crossing the Delaware,” only it replaces George Washington's crew with members of the Trump administration.

“My new painting—‘Crossing the Swamp’ ‘Never give up. Never lower your light. Never stop till the swamp is dry,’” McNaughton tweeted.