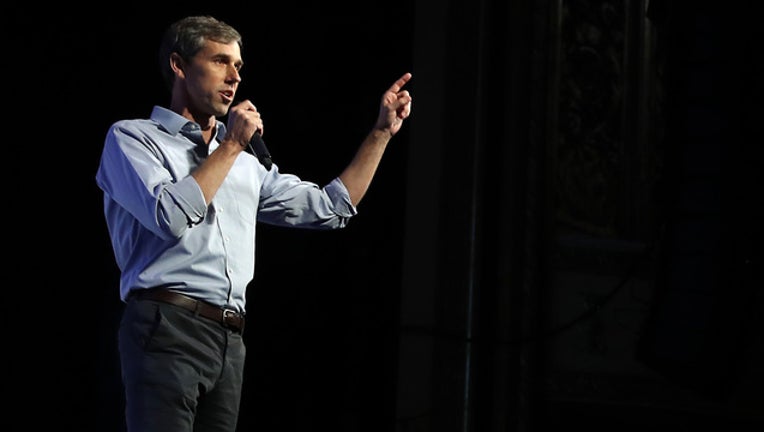 FREDERICKSBURG, Va. (AP) - Facing questions about his relatively meager charitable giving, Democratic presidential candidate Beto O'Rourke said Wednesday that he and his family had donated more than reported on past tax returns because they weren't interested in taking deductions.

Speaking to reporters after addressing hundreds at a crowded Jamaican restaurant in Fredericksburg, about 50 miles south of Washington, O'Rourke said, "We're trying to go back to some of these organizations to see if they can share with us, over the last 10 years, how much we have donated."

"We've made donations to so many organizations in small amounts, in the hundreds of dollars, in larger amounts, in the thousands of dollars. This is beyond what's itemized and reflected in our taxes," the former Texas congressman said, adding his family "just didn't report it because it wasn't important for us to take the deduction. Never thought it would be an issue because I didn't expect to release my taxes 'cause I never thought that I'd be running for president."

Charitable donations can usually be deducted from overall taxable income, meaning the O'Rourkes had financial incentives to fully report their giving. O'Rourke implied that the family didn't need the tax reductions, though, and his personal finances suggest that's the case. According to the nonpartisan Center for Responsive Politics, O'Rourke, who left Congress in January, had a net worth of nearly $9 million in 2015 - ranking him near the top 50 in wealthiest House members.

On Monday, O'Rourke released a decade's worth of federal tax returns through 2017, showing that he and his wife, Amy, had donated about 0.7% of their income overall to charity. That included just $1,166 donated on a total adjusted income of $370,412 in 2017 - or about 0.3%. An Associated Press analysis of the tax returns released by seven Democratic presidential hopefuls- including Sens. Bernie Sanders of Vermont , Kamala Harris of California and Elizabeth Warren of Massachusetts - shows that O'Rourke's charitable donations were the lowest.

O'Rourke's giving, nonetheless, included an increase to $12,900 in 2013, when he donated his congressional salary during the weeks of a partial government shutdown to a veterans' charity - following the lead of many lawmakers from both parties. Asked Wednesday if he made donations to similar groups when the government wasn't shuttered, O'Rourke said that he had, but he wasn't sure how much money that entailed.

He also noted that he, his wife and three children have donated their time to charitable organizations, including to a shelter in Ciudad Juarez, across the Rio Grande from O'Rourke's native El Paso, Texas, which takes in Central American immigrants seeking asylum in the United States. He said that last Christmas Eve, the family helped mobilize volunteers to aid a large group of immigrants whom U.S. immigration officials released at the El Paso bus station.

"In addition to the dollar amount, our time," he said of charitable giving. "We've donated time on the boards of nonprofits and certainly in public service and public life."

Reporters aren't the only ones asking about the issue.

When an attendee of O'Rourke's town hall Tuesday in Charlottesville, Virginia, asked about his family's small amount of charitable giving, the candidate suggested that running for president could count as donating his time.

"I'm doing everything I can right now, spending time with you, not our kiddos, not back in El Paso," he said, "because I want to sacrifice everything to make sure that we meet this moment of truth with everything that I've got."