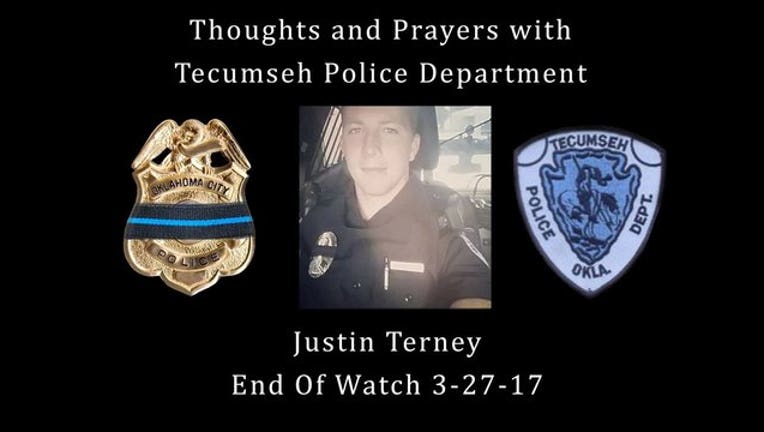 OKLAHOMA CITY (AP) - A 22-year-old officer and new recruit died Monday morning after a shootout with a man who fled a traffic stop in central Oklahoma, police said.

Terney had only graduated from the police academy last summer, Kidney said.

"He was a very young officer, just getting a start," he said. "He was taken way too soon."

The man who fired on Terney was also shot multiple times and in intensive care Monday morning, Kidney said. Police have not released his identity.

Terney pulled over a vehicle about 11:30 p.m. Sunday in Tecumseh, 35 miles southeast of Oklahoma City, according to police. A woman was driving, and Terney called dispatchers to see if a male passenger had any outstanding warrants.

At that point, the man ran toward some nearby woods, Kidney said. Terney chased the man on foot and used a stun gun, but that failed to stop him. The man then shot at Terney, who returned fire, he said.

Both wounded men were taken to OU Medical Center.

Authorities have yet to confirm the identity of the other man involved in the shootout.

"If it is who we think this person is, there's a possibility that he has some warrants," Kidney said. "That could be the reason that he ran."

Police detained the woman who was driving for questioning.

The Oklahoma State Bureau of Investigation said it will assist with crime scene investigation, which is common for police shootings.

Kidney told The Oklahoman that Terney had a new puppy and had hoped to become a canine officer. Terney grew up in Canadian, in eastern Oklahoma, and was also a volunteer firefighter, Kidney said.