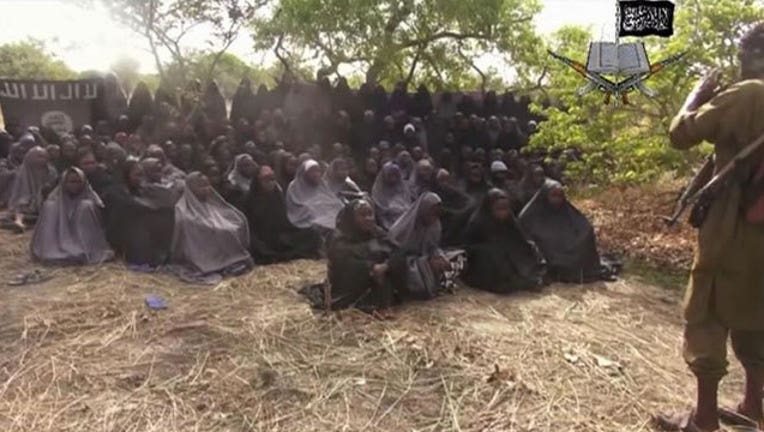 LAGOS, Nigeria (AP) — One of the teenagers kidnapped by Boko Haram extremists over two years ago from a boarding school in northeastern Nigeria has been found with a baby and reunited with her mother, a doctor said Wednesday — the first of the Chibok girls to be recovered since the mass abduction.

The 19-year-old woman, described by an uncle as traumatized, was found wandering with her baby on Tuesday on the fringes of the remote Sambisa Forest, located near Nigeria's border with Cameroon.

The news gave hope to the families of the 218 girls who are still missing that she may provide information as to their whereabouts. But the young woman told her mother that some of the Chibok girls have died in captivity and the others still are being held, according to her family's doctor, Idriss Danladi, who spoke to The Associated Press after talking with the mother.

On April 14, 2014, Boko Haram stormed and firebombed the Government Girls Secondary School at Chibok and seized 276 girls preparing for science exams. Dozens managed to escape in the first hours, but 219 remained captive.

The young woman is the first to be found since the kidnapping, which grabbed worldwide attention and put a spotlight on the violence of Nigeria's homegrown Islamic extremists.

"God reigns!" one of the founders of the Bring Back Our Girls movement, Oby Ezekwesili, trumpeted on social media. "OUR #ChibokGirl ... IS BACK!!!!!!! #218ShallBeBack because #HopeEndures."

There were conflicting accounts about how the young woman was found.

Danladi said the young woman, who was 17 when abducted, was found by hunters and taken with her baby to her home village of Mbalala, near Chibok, to be reunited with her mother. Her father died while she was in captivity, said her uncle, Yakubu Nkeki. All three were then brought to a military camp and arrived under military escort Wednesday night in Maiduguri, the biggest city in the northeast.

But Nigeria's military said it had rescued the young woman and her baby, along with a Boko Haram suspect who claimed to be her husband.

"This is to confirm that one of the abducted Chibok school girls ... was among the persons rescued by our troops," said the army spokesman, Col. Sani Kukasheka Usman.

Late Tuesday, an official at State House in Maiduguri said the liberated woman told him that she was rescued and led from the forest by her Boko Haram "husband" because the camp ran out of food and they feared their baby would starve to death. The military said the man, Mohammed Hayatu, appears to be a Boko Haram commander and is being held for interrogation. The official spoke on condition of anonymity for fear of upsetting the military.

The woman is to meet Nigeria's President Muhammadu Buhari in Abuja, the capital, perhaps as soon as Thursday, reported PR Nigeria, an agency that carries official news.

The AP is not identifying the freed woman by name because she likely is a victim of sexual violence.

Danladi, who is from Chibok and has treated several of the parents, said the young woman's mother attempted suicide some months after her only child was seized.

The mother "suffered a huge traumatic disorder. ... I had to convince her that she just has to stay alive if she really wants her daughter returned home safe and sound," he said.

The Rev. Enoch Mark, whose two daughters are among the missing, said the news brought renewed hope to the parents of the Chibok girls.

"I believe that, by the grace of God, our daughters, some of them, will be found if they are still alive," he said.

At least 16 of the girls' parents have died since the kidnapping, Bitrus said, and others have ailments they blame on their ongoing trauma over their daughters' prolonged captivity in violent circumstances.

"I suffered a stroke on Friday, that's why you don't recognize my voice," Mark said.

The inability of Nigeria's government and military to rescue the girls led, in part, to last year's electoral defeat of President Goodluck Jonathan, who was seen as uncaring.

The U.S., France and Britain offered help to find the girls, sending in drones, hostage negotiators, intelligence officers and others.

A social media campaign using the hashtag #BringBackOurGirls reached to the White House, where first lady Michelle Obama promised her husband would do all in his power to help. "Our prayers are with the missing Nigerian girls and their families. It's time to #BringBackOurGirls," she tweeted in May 2014.

R. Evon Idahosa, executive director of PathFinders Justice Initiative, which works on behalf of victims of child abuse, sex trafficking and rape, said the West has not done enough to help the Chibok girls.

Idahosa noted the response after the 2015 Charlie Hebdo attack in Paris, when government leaders marched "in solidarity, arm-in-arm over the death of 17 people. Not to say that that is any less important than the lives of these girls, but the reality is that one Western life definitely has a different value from the value of a girl in Nigeria."

Being freed from Boko Haram captivity does not end the trauma for often-pregnant victims or teen-aged mothers: many are ostracized, dubbed "Boko Haram wives."

They "often face mistrust, stigma and rejection when they return to their communities," UNICEF spokeswoman Helene Sandbu Ryeng said.

In addition, "Boko Haram abductees are frequently and arbitrarily detained by the Nigerian military ... where they were interrogated, treated with suspicion and fear, and had no access to medical services," the Washington-based organization's spokeswoman Alyssa Eisenstein said.

When they are freed they confront "tremendous food insecurity in the northeast (that) is forcing many women and girls to turn to dangerous coping mechanisms, including survival sex, to prostitute themselves for food," Eisenstein said.

It's not known how many thousands of girls, boys and young women have been kidnapped by Boko Haram in a nearly 7-year-old insurgency that has killed some 20,000 people, forced more than 2 million from their homes and spread across Nigeria's borders.

Boko Haram held a large swath of northeastern Nigeria where it declared an Islamic caliphate in 2014. A multinational force from Nigeria and its neighbors has reduced their territory, reportedly hemming them into the Sambisa Forest. The insurgents have focused on attacking soft targets like markets and mosques with suicide bombers, often girls and young women who are feared to be among their captives.

There also are fears that Boko Haram is sending fighters to Libya to join the Islamic State group, U.S. Deputy Secretary of State Antony Blinken said Saturday at a summit on fighting Boko Haram. The group declared itself the West Africa Province of IS last year, and Blinken's suggestion raised concern the two groups could start an extremist push into the vast and lawless lands of the Sahel region.

This version corrects that the young woman was reunited with her mother on Tuesday, not Wednesday.