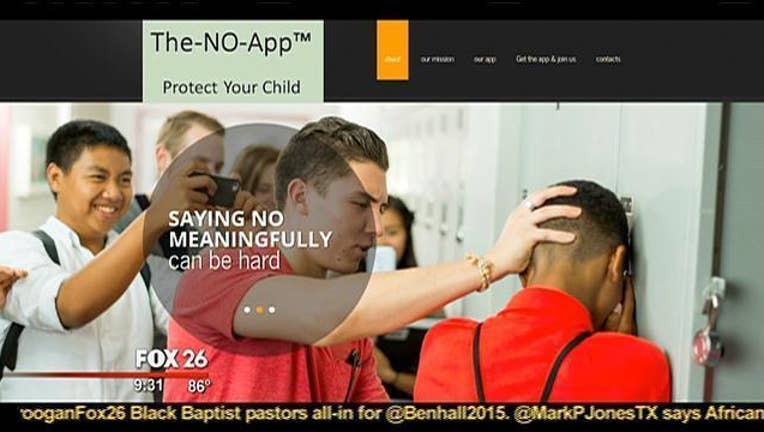 MYFOXHOUSTON - For decades bullying has been a huge problem for kids.

It’s estimated that 25 to 33 percent of all kids nationwide are affected by bullying.

“This is the first app that gives a sense of empowerment to both the kid and his or her parents,” said app creator Michael Lissack.

Here’s how it works.

“Now that you got your app on this phone the next time the bully approaches you to start hassling you you pull out your phone and here’s what happens,” Lissack said.

Lissack says the bully will see a rather tough looking female cop on the screen on the phone.

“And she says you were told no a video of that no has been recorded and saved what is it about the word no that you don’t understand no means no,” said Lissack.

Next a stop sign appears that says a video of you watching this phone message has been safely encrypted into the cloud.

Once a child pushes the button on the app their parents are notified immediately by e-mail and text message.

“That says this phone number blah blah blah had the app activated and here’s a map to the location,” Lissack said.

A lot of parents find it hard to get school districts and law enforcement to take bullying complaints seriously citing a lack of proof or evidence.

But this app Lissack says could change that.

“The idea that there exists video evidence and that the parents have the ability to pursue this if they wanted to totally changes that conversation,” Lissack said.

The app is available on the Apple App Store for 5 dollars per year.