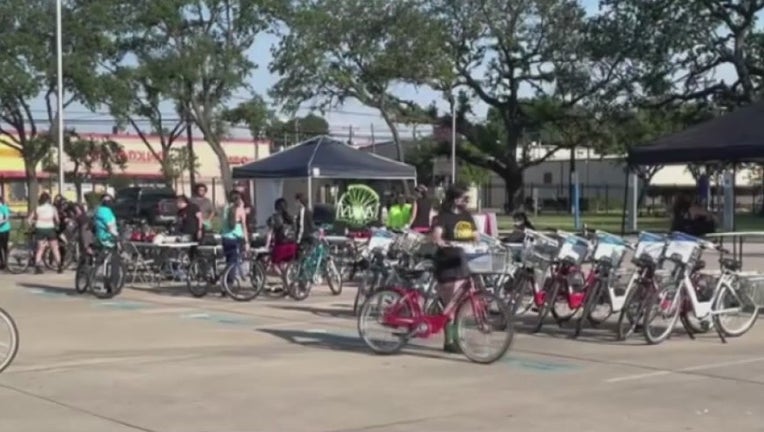 HOUSTON - More people have started riding bicycles since the pandemic began. But a new study says your bike helmet may not protect your head in an accident as much as it could.

Researchers say overall, most bike helmets do a good job of protecting cyclists from skull fractures and brain injuries in a crash.

But a new study by the Imperial College of London says bike helmet testing is outdated and doesn't account for the way many accidents actually happen.

"Bicycle helmets have been around for many decades now, and they have been tested originally on what we call vertical impacts. This test came about almost 70 years ago, I believe," said Dr. Mazdak Ghajari, senior lecturer in the HEAD lab at Imperial College London.

The researchers say most helmets are currently tested for vertical impact from right angles, which is how you'd crash if your bike was stationary.

"In real world impacts, we usually do not have a vertical impact. We usually have an oblique impact," said Dr. Ghajari.

That oblique impact, they say, is the angle a cyclist's head hits the ground while falling off a moving bike.

"We've used an oblique angle. So this means that when the headform falls, it falls and then rotates the head," explained study author Fady Abayazid, Ph.D. (c).

This study found some newer helmets with features such as friction-reducing layers, shearing pads, and airbags reduce strain across the brain.  But they found some don't live up to claims to reduce rotational forces.

"What we hope is that this will shed some light on the issue, bring some attention to it, and hopefully bring researchers, policymakers, engineers, and clinicians to really pay attention to this because lives are at stake," said Abayazid.

We asked researchers at the Virginia Tech Helmet Lab in Blacksburg, Virginia about the report.  VT Director of Outreach and Business Development Barry Miller agrees the industry's testing standards are too narrow.

"The problem is those certification standards are pass or fail. So you as a consumer, if you're picking up two off the shelf, obviously they both should have passed in order for you to buy it. But you would have no idea which one greatly surpassed the standard certification test or which one barely passed it," said Miller.

He says the Virginia Tech Lab fills that gap for consumers by rating helmets on a 0 to 5 scale based on tests that also include oblique angles and rotation.

"We use a 45 degree angle on our bike helmet tests, and we put sandpaper on the angle to simulate that friction," said Miller.

But researchers from both labs agree cyclists should continue to wear helmets, as many are good at preventing serious head injuries.

A spokesperson for the Consumer Product Safety Commission, which sets standards for bike helmets, says they haven't seen the study yet and can't comment on it.

You can see how your helmet stacks up on Virginia Tech's helmet test results.