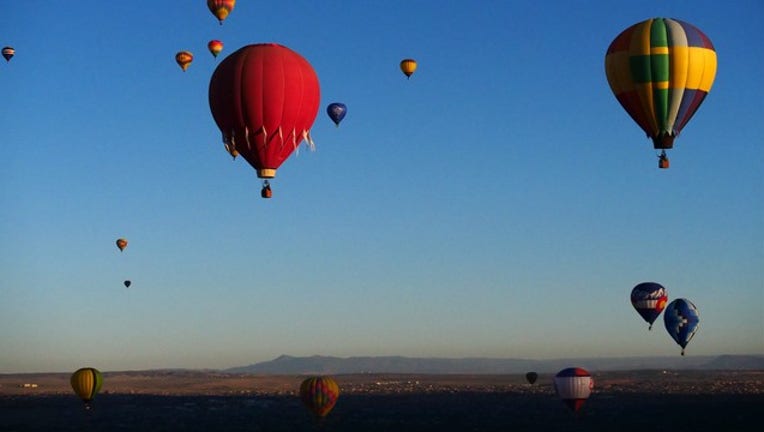 Balloons fly over the Sandia Mountains during a Mass Ascension during the 2018 Albuquerque International Balloon Fiesta on October 6, 2018 in Albuquerque, New Mexico.

SANTA FE, N.M. (AP) - New Mexico's film industry appears to be on the brink of a boom thanks to abortion law controversies in other states and expanded incentives.

A recent spike in film production in the state comes as Hollywood targets both Georgia and Louisiana over recently passed restrictive abortion laws, the Albuquerque Journal reports.

The political developments are being watched closely in New Mexico, which is poised to benefit even though state officials have said there's no organized campaign to lure film productions from those states.

"I don't know that we are necessarily using that as a drawing card, because we are a drawing card," New Mexico Film Office Director Todd Christensen said.

The jump also comes as New Mexico is set to more than double its annual state spending cap on film incentives.

In addition, NBCUniversal announced Friday it will build a television and film studio in a warehouse district just north of downtown Albuquerque as it seeks to expand its footprint in one of the fastest-growing film production hubs in the country.

The company said it entered a 10-year venture with a developer to reshape an empty warehouse into a studio with two sound stages and offices. The studio will be used to produce shows for broadcast and cable channels.

"The Power" will be a 10-part series based on Naomi Alderman's 2016 novel in which women around the world suddenly gain the ability to electrocute people.

New Mexico has on its books a 1969 state law that banned abortion in most cases. But the law became unenforceable after it was superseded by the landmark Roe vs. Wade ruling by the U.S. Supreme Court.

An attempt to scrap the 1969 law failed during the last state legislative session in the Democratic-controlled Senate. Democrats have downplayed the vote and have vowed to try again in the near future.

New Mexico was one of the first states to launch a film incentive program in 2003 and upped the ante with a new package of film and TV incentives passed by lawmakers during this year's 60-day legislative session and signed into law by Democratic Gov. Michelle Lujan Grisham in March.

The package raises a 2011 cap on what the state can pay out to film and TV productions from $50 million to $110 million per year, while also authorizing the spending of up to $225 million to pay down an accumulated backlog in film incentives.

Film companies receive 25 percent rebates on qualifying expenditures on goods and services in New Mexico. There is a 30 percent rebate for some TV shows.

In recent months, the New Mexico Film Office has received about two calls a day from production companies asking about the new incentives and possible locations in the state.

"We're getting calls," Christensen said. "If the script fits, they'll come here. In some cases, they can change the scripts to fit New Mexico."

Not all legislators are thrilled with the expansion of the state's film incentive program.

State Sen. Mark Moores, a Republican who voted against this year's bill, said he would be uneasy about using the abortion laws in Georgia and Louisiana as leverage, adding that he has a problem with "out-of-state corporate extortion" on what he described as a social issue.

"If we as a state make a political decision for New Mexico that they don't like in the future, will they extort us like they're trying to do to Georgia?" Moores asked.