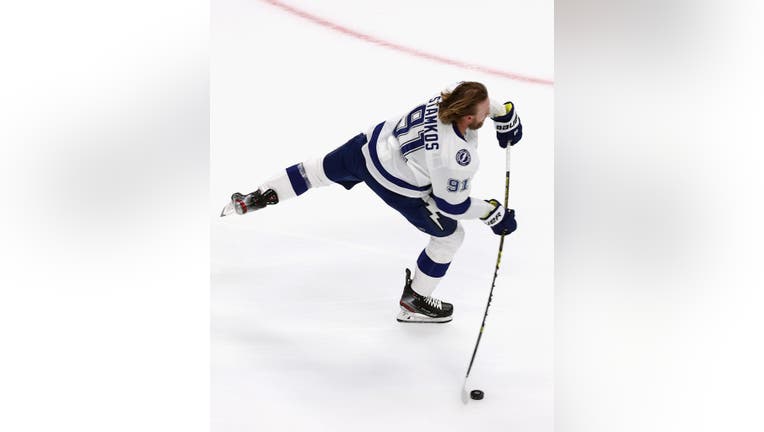 EDMONTON, ALBERTA - SEPTEMBER 23: Steven Stamkos #91 of the Tampa Bay Lightning skates in warm-ups prior to the game against the Dallas Stars in Game Three of the 2020 NHL Stanley Cup Final at Rogers Place on September 23, 2020 in Edmonton, Alberta,

TAMPA, Fla. - A neighbor called sheriff's deputies on some rabid Tampa Bay Lightning fans who were screaming “shoot! shoot!" as they watched Game 3 of the Stanley Cup final on television Wednesday night.

The call prompted several Hillsborough County Sheriff's deputies to show up at Devon Garnett's apartment door. He and two friends had gathered to watch the game at Garnett's Radius Palms apartment.

In the first period, the trio began screaming for a goal, prompting the 911 call.

The caller told dispatchers someone was yelling loudly in the apartment above just before 8:30 p.m. Wednesday, according to Hillsborough County Sheriff's spokesperson Natalia Verdina.

“So they came to the door and thought there were guns in the house,” Garnett, 26, told the Tampa Bay Times. “We’re like, ‘Nope, we’re just screaming for Steven Stamkos.’”

According to a sheriff's office dispatch report released Thursday, the complainant told police he heard a couple screaming at each other, with one yelling, “I dare you to shoot!"

Deputies went on their way after talking to everyone involved.

The police "completely understood and just laughed it off,” Garnett said. “But they thought it was serious because I was screaming ‘Shoot!’ as in ‘Shoot the puck.’”