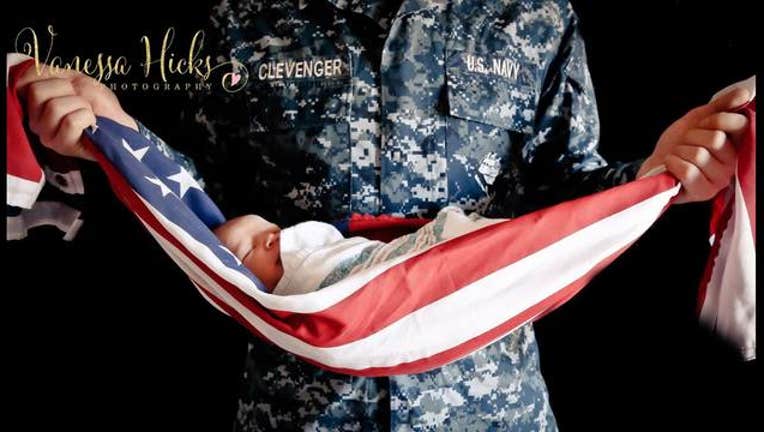 We all know a picture tells a thousand words. Well, one picture of a baby cradled in the American flag is sparking thousands upon thousands of comments and its photographer is standing by it.

Vanessa Hicks, 29, snapped the picture of the baby after she was approached by new parents. The man holding the baby in the photograph is the father, Rodney Clevenger, who is a sailor.

Hicks, a Navy veteran, posted the image to her business's Facebook page along with other photos, as part of a sneak peek of their photo session.

On her Facebook page, Hicks wrote to her fans saying, " I love the shot. The family loves the shot. Most of you loved the shot."

But one Facebook group does not love the shot.

The Facebook page "You Call Yourself a Photographer?", which has since been taken down, criticized the photo, claiming the flag was used disrespectfully.

Before the page was taken down, a post criticizing the photograph read, "This flag is a symbol of everything my son died for many years ago. It was of the utmost honor to have a flag laid upon your coffin as my son did. That honor is taken away when disrespectful photographers throw our flag code out the window. Mr. Clevenger, you have disgraced our fallen soldiers as well by disobeying that code."

Hick's business page was then inundated with messages criticizing the image. But just as quickly as those angry messages appeared, so did those in support of the photograph. Many of those coming to her defense are veterans and military servicemen and women.

Hick is also receiving several requests for a print of the photograph. She says she will donate 15 percent of the profit from sales of this photo shoot to the United Service Organization.