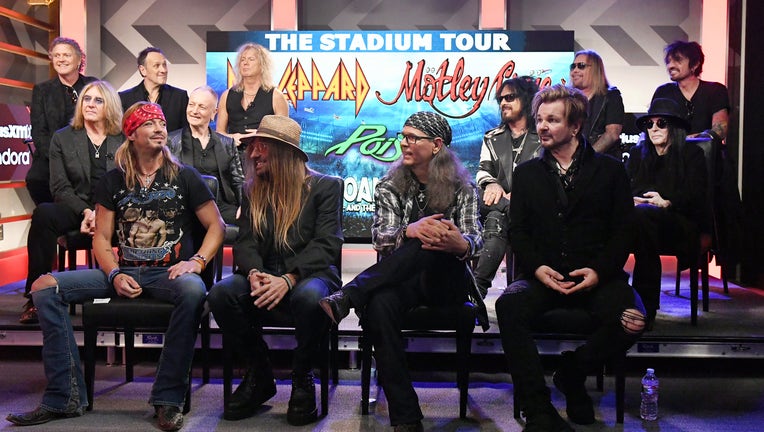 Nearly six years after agreeing never to tour again, Mötley Crüe made a very clear and public announcement: they're coming back.

The band will be kicking off a U.S. stadium tour in 2020 with Poison, Def Leppard and Joan Jett & the Blackhearts, according to Rolling Stone.

After putting an end to almost 35 years on the road, the heavy metal band announced the contract that allegedly prevented them from touring is “off the table because a whole new generation of ‘Crueheads’ are relentlessly demanding for the band to come back together."

In the video, Machine Gun Kelly, who portrayed Tommy Lee in the Netflix biopic "The Dirt," announces that they are blowing up their “cessation of touring contract.” The film's global success catapulted Motley Crue's music back to the top of the worldwide charts with the younger generation, according to the band.

The YouTube video entitled “Get Ready #MotleyCureisBack" has garnered nearly 400,000 views since being uploaded Monday.

“Since playing Tommy Lee in 'The Dirt,' so many of my fans have said how they wish they could’ve seen the real Motley Crue play live,” said Kelly. “I never thought I would see the day when this would become a reality. But the fans spoke and Motley Crue listened!”

Prior to the tour, the band claimed to sign a binding agreement that would prohibit them from playing again after the tour ended, according to Rolling Stone.

“Legally, we can’t play again,” bassist Nikki Sixx told the music magazine at a 2014 show in Denver. “The only loophole is if all four band members agreed to do it, we could override our own contract. But we know that will never happen. There are people in this band who will refuse to ever do it again, and you’re talking to one of them. There is no amount of money that would ever make me do it again because I have such pride in how we’re ending it.”