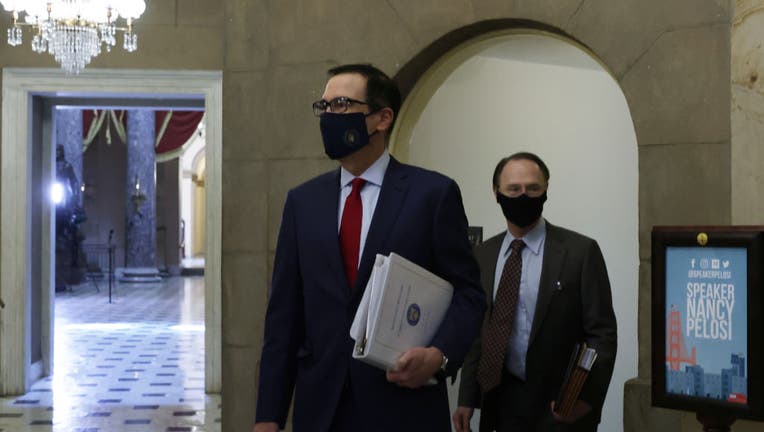 “I’ve probably spoken to Speaker Pelosi 15 or 20 times in the last few days on the CR,” Mnuchin told the Senate Banking Committee on Thursday, referring to a continuing resolution (CR) to extend government funding through the end of the year. "And we’ve agreed to continue to have discussions about the CARES Act.”

Pelosi also told reporters at the Capitol on Thursday that she expected to revive negotiations with the White House shortly.

"We'll be hopefully soon to the table with them," she said.

Their comments come amid a high-stakes impasse between the two parties over another round of emergency relief for American workers and families still reeling from the virus-induced crisis. Although Democrats and Republicans broadly agree that another bill is necessary to aid the economy's recovery, they sharply disagree over the size and scope of it.

Democrats have offered to come down to $2.2 trillion from the roughly $3 trillion HEROES Act, which the House passed in May, and insist the legislation needs to include extended unemployment benefits, a fresh round of $1,200 stimulus checks, and additional funding for state and local governments.

But the White House and Republican leaders want to keep the price tag closer to $1 trillion amid growing concerns among some lawmakers over the nation's ballooning deficit, which is projected to hit a record-shattering $3.3 trillion this year, according to the Congressional Budget Office.

When asked last week whether she was allowing perfect to be the enemy of good by holding out for $2.2 trillion, Pelosi said Friday: "It's not perfect. Perfect is $3.4 trillion."

House Democrats are drafting a $2.4 trillion aid package in hopes of jumpstarting negotiations, according to the Associated Press. The revised measure is likely to include funding for state and local governments; a second $1,200 stimulus check; more than $100 billion in aid for schools to safely reopen; and renewed funding for jobless aid.

Economists have urged lawmakers to cut a deal or risk imperiling the nascent recovery from the shutdown earlier this year.

Congress is scheduled to be in session through early October.