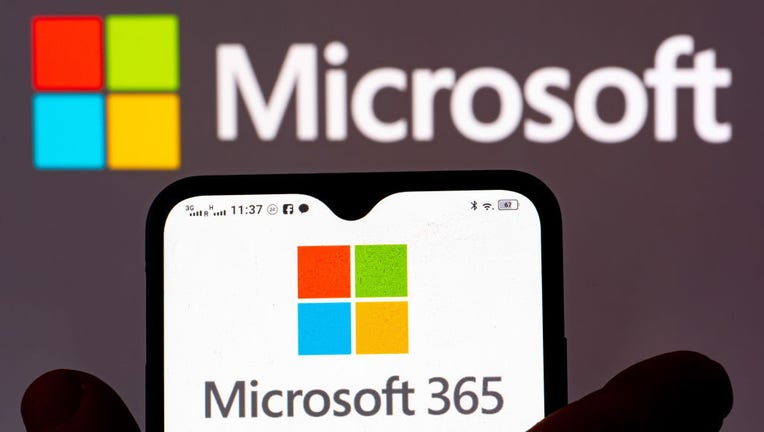 In this photo illustration, the Microsoft 365 logo is seen displayed on a smartphone and Microsoft logo in the background. (Photo Illustration by Igor Golovniov/SOPA Images/LightRocket via Getty Images)

LONDON - Microsoft said it's seeing some improvement to problems with its online services including the Teams messaging platform and Outlook email system after users around the world reported outages Wednesday.

In a status update, the tech company reported "service degradation" for a number of its Microsoft 365 services.

Thousands of users reported problems with Teams, Outlook, the Azure cloud computing service and XBox Live online gaming service early Wednesday on the Downdetector website, which tracks outage reports. Many users also took to social media to complain that services were down.

Many users took to social media to complain that the services were down.

By later in the morning, Downdetector showed the number of reports had dropped considerably.

Compared to a year prior, sales per employee in August 2019 were found to be 40 percent higher, while total working days were down 25.4 percent.

"We’re continuing to monitor the recovery across the service and some customers are reporting mitigation," the Microsoft 365 Status Twitter account said. "We’re also connecting the service to additional infrastructure to expedite the recovery process."

It tweeted earlier that it had "isolated the problem to a networking configuration issue" and that a network change suspected to be causing the problem was rolled back.

A day earlier, Microsoft reported that its quarterly profit fell 12%, reflecting economic uncertainty that the company said led to its decision this month to cut 10,000 workers.