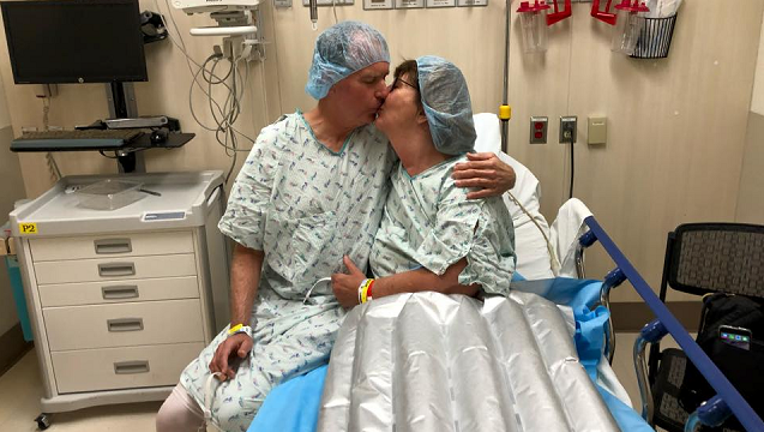 A Seattle, Washington man recently donated one of his kidneys to his wife of nearly 30 years. (Photo courtesy of Steve Kennedy)

(FOX NEWS) -- A Seattle, Washington man recently donated one of his kidneys to his wife of nearly 30 years.

Last month, Steve donated his kidney to his wife, Lesley, who has long suffered from polycystic kidney disease, a condition that “causes numerous cysts to grow in the kidneys,” according to the National Kidney Foundation. The cysts, which are filled with fluid, can damage kidneys if they grow too large.

In Lesley’s case, the condition worsened to the point where she was put on dialysis. Her physicians informed her that she would need a transplant in order to survive.

The couple, which enjoys traveling and will celebrate their 30th anniversary in October, was worried.

"It's not easy asking someone for a kidney," Lesley told the news station. "It's not something you just walk up to anybody on the street and say hey, would you be willing to give me a kidney?"

A short time later, Lesley’s colleague and sister each offered to donate a kidney to her. Neither were a match, however.

That’s when Steve decided he would donate a kidney to Lesley, should he be a match. He was.

On July 19, Steve posted on Facebook that the surgery, which took place at Virginia Mason Hospital in Seattle, was successful.

“My donated kidney appears to be doing pretty well in its new home inside Lesley. But it may be a bumpy ride for a while. Thanks to everyone for their incredible love and support,” he wrote.

"It's probably the best thing I've ever done in my life," Steve added to Q13 News, which reported that the couple is now back home and recovering.

“Also consider organ donation,” Steve wrote. “It is truly an amazing gift to be able to donate. Especially to your spouse.”