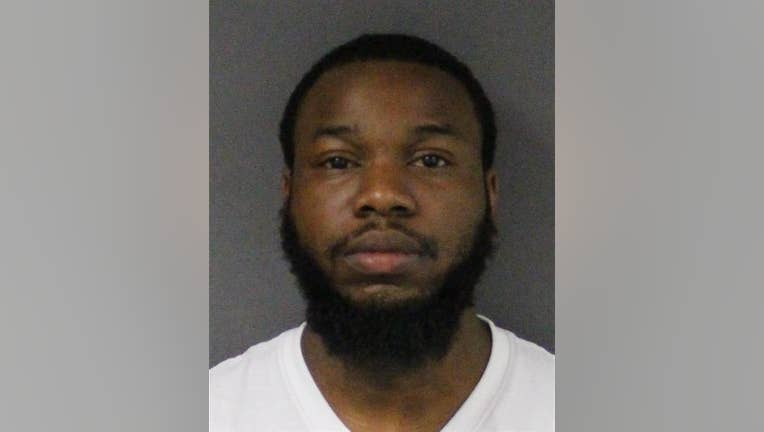 Michael Sanders, 23, is facing a number of charges in the fire that left three people dead, including his own daughter. (Mercer County Prosecutor's Office)

HAMILTON TOWNSHIP, N.J. - Authorities in Mercer County, New Jersey have made an arrest in connection with a fire at a duplex that left three people dead, including his own infant daughter.

On Monday, the Mercer County Prosecutor's Office announced the arrest of Michael Sanders, 23, after they say he set the deadly fire last Friday morning.

Sanders, a Trenton resident, is charged with three counts of first-degree murder, two counts of aggravated arson, and related charges. He was taken into custody at a hotel in Plainsboro, New Jersey early Monday morning, authorities say.

Friday morning, around 3:40 a.m., police say the fire started at the two-and-a-half-story wood-frame duplex on the 200 block of Woodlawn Avenue and quickly engulfed both sides of the building.

A nine-month-old baby girl, identified as Malani Sanders, and a 42-year-old female, identified as Tiffany Abrams-Jones, were found deceased at the scene.

Three other people were transported to a nearby hospital with critical burn injuries. One of those victims, 50-year-old Prince Jones, succumbed to his injuries.

Prince Jones and Tiffany Abrams-Jones were identified as Malani Sanders' grandfather and grandmother.

Investigators say they were able to retrieve video from numerous cameras in the area and speak to witnesses. One witness told detectives that before the fire, Malani's mother received a text from Michael Sanders telling her to get their baby out of the house.

Detectives determined that Sanders took a taxi from an area near his residence in Trenton and was dropped off approximately one block from 213 Woodlawn Avenue shortly after 3:00 a.m.  Sanders, wearing a dark-colored hooded sweatshirt with the hood over his head, a mask, and white gloves, walked past the residence towards Greenwood Avenue approximately 15 minutes before the fire started.

Surveillance video obtained by investigators also allegedly shows Sanders purchasing what appeared to be a dark-colored torch lighter and cigars at a gas station near the home.

Video then allegedly shows Sanders walking back toward the home on Woodlawn Avenue, and the reflection of light coming from the home can be seen on camera four minutes after he passed.

Additional video showed Sanders walking back to his home on Bayard Street in Trenton, without the gloves, mask, or sweatshirt he had previously been seen wearing.

Detectives searched the area and found a dark hooded sweatshirt a few doors down from his house at the bottom of a basement stairway.