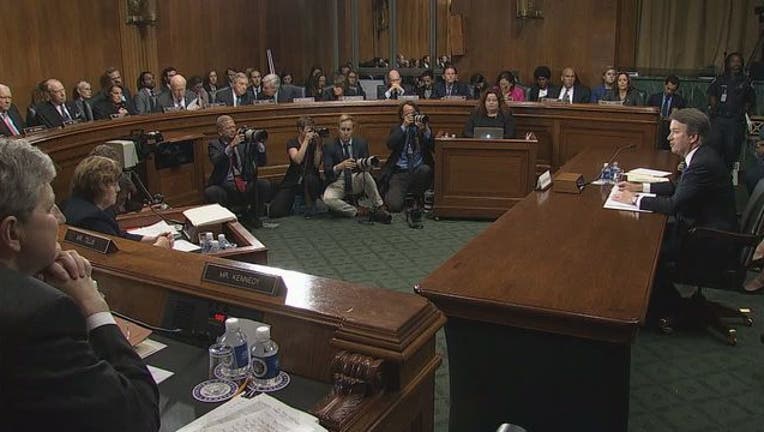 ROME - (AP) -- The magazine of the Jesuit religious order in the United States has publicly withdrawn its endorsement of Judge Brett Kavanaugh as Supreme Court justice following testimony before the Senate Judiciary Committee by the Jesuit-educated Kavanaugh and the woman accusing him of sexually assaulting her decades ago.

In an editorial posted late Thursday, America magazine said it had no special insight into whether Kavanaugh or Christine Blasey Ford is telling the truth. But it said that the nomination was no longer in the interests of the country and "should be withdrawn."

"If Senate Republicans proceed with his nomination, they will be prioritizing policy aims over a woman's report of an assault," the editors wrote. "Were he to be confirmed without this allegation being firmly disproved, it would hang over his future decisions on the Supreme Court for decades and further divide the country."

The reversal is significant given Kavanaugh has repeatedly cited his Catholic faith and Jesuit education in defending himself against Ford's accusations. In his opening statement Thursday, Kavanaugh twice referenced his years as a student at the Jesuit-run Georgeown Prep school in Maryland. Ford has accused a drunken Kavanaugh of assaulting her at a house party in the summer of 1982, when he was a student at the school. Kavanaugh has vigorously denied her claims.

America in July had endorsed Kavanaugh on the grounds that he might have provided the Supreme Court with the vote needed to overturn Roe v. Wade, the 1973 decision that legalized abortion nationwide. The Catholic Church firmly opposes abortion.

"Anyone who recognizes the humanity of the unborn should support the nomination of Judge Kavanaugh," the editors entitled their July 9 editorial, before Ford's accusation was made public.

In their new editorial, America's editors said they were still committed to finding a justice with Kavanaugh's textualist approach to jurisprudence that is suspicious of the kind of judicial innovation that led to the Roe decision. But they said Kavanaugh was not the only candidate available.

"For the good of the country and the future credibility of the Supreme Court in a world that is finally learning to take reports of harassment, assault and abuse seriously, it is time to find a nominee whose confirmation will not repudiate that lesson," the editors wrote.

The magazine is not the only Jesuit institution to respond to the nomination.

The president of Georgetown Prep, the Rev. James R. Van Dyke, has said the controversy over Ford's accusations has compelled the school to "evaluate our school culture" and redouble efforts to help students develop a healthy understanding of masculinity.

"And it is a time to talk with them honestly and even bluntly about what respect for others, especially respect for women and other marginalized people means in very practical terms--in actions and in words," Van Dyke wrote to the school community Sept. 20.