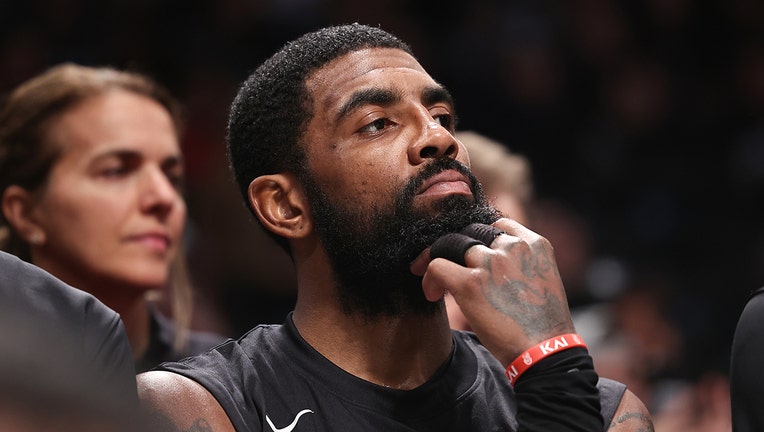 Kyrie Irving of the Brooklyn Nets during a game at Barclays Center in New York City, Oct. 31, 2022. (Dustin Satloff/Getty Images)

NEW YORK (AP) - Kyrie Irving said Wednesday he opposes all forms of hate, and he and the Brooklyn Nets will each donate $500,000 toward groups that work to eradicate it.

Irving took responsibility for the negative impact on the Jewish community that was caused by his appearing to support an antisemitic work, as the Nets and their star guard worked to sooth the anger that had been directed at them since Irving's Twitter post and refusal to apologize for it.

"I oppose all forms of hatred and oppression and stand strong with communities that are marginalized and impacted every day," Irving said in a joint statement with the Nets and Anti-Defamation League. "I am aware of the negative impact of my post towards the Jewish community and I take responsibility."

Irving had drawn criticism around the NBA — including from Nets owner Joe Tsai — for posting a link to the film "Hebrews to Negroes: Wake Up Black America" on his Twitter feed last week.

I oppose all forms of hatred and oppression and stand strong with communities that are marginalized and impacted every day. I am aware of the negative impact of my post towards the Jewish community and I take responsibility.

"I do not believe everything said in the documentary was true or reflects my morals and principles," Irving said. "I am a human being learning from all walks of life and I intend to do so with an open mind and a willingness to listen."

Irving hadn't spoken since Saturday, when he defiantly defended his right to post about material he believes. He didn't talk to reporters after either of the Nets' home games since — one of them featuring fans wearing "Fight Antisemitism" shirts as they sat courtside.

"There is no room for antisemitism, racism, false narratives or misguided attempts to create animosity and hate," said Sam Zussman, the CEO of BSE Global, parent company of the Brooklyn Nets and Barclays Center. "Now, more than ever, there is a pressing need to ensure education in these areas. We are putting our prior statements into practice because actions speak louder than words."

Irving and the Nets will work with the ADL to develop inclusive educational programming to combat all forms of bigotry and antisemitism.

General manager Sean Marks said Tuesday that the Nets had been in discussions with the ADL on the proper way to respond to the fallout involving Irving, who was not punished by the team or the NBA.

"At a time when antisemitism has reached historic levels, we know the best way to fight the oldest hatred is to both confront it head-on and also to change hearts and minds," ADL CEO Jonathan Greenblatt said.

The Nets added that they and the WNBA's New York Liberty would host a series of community conversations at Barclays Center in partnership with ADL and other national civil rights organizations and local community associations.