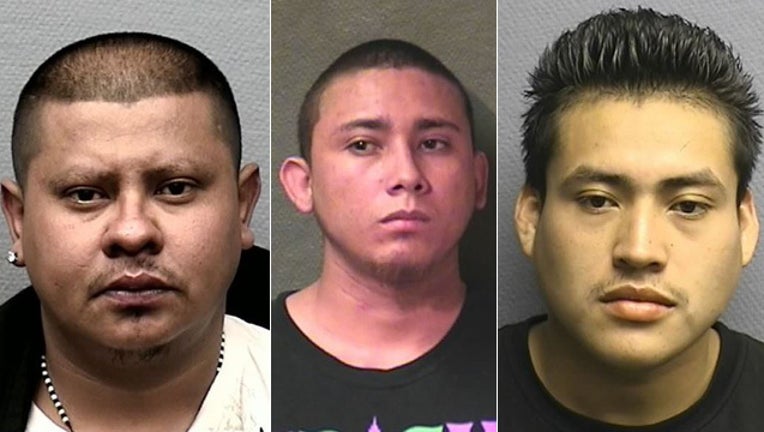 The early morning slaying was brutal. Two MS-13 gang members ran down a man they suspected of being a rival, and took turns shooting him in the head and stomach with a 40 caliber handgun.

Then they jumped into a waiting getaway car and sped away.

Three years later, with a jury’s decision Wednesday, “Dusty,” “Despiadado” and “Little Boy,” have all been convicted of the murder, and all are headed to prison for decades a piece, Harris County prosecutors announced Wednesday.

Hector Diaz, a construction worker, was pronounced dead in an ambulance as he headed to a hospital on that Sunday in November 2015.

“We will never know what Hector said in those final moments of his life to these three killers, but the violent way in which they chose to take his life after only a brief conversation with him is what makes this gang so dangerous,” Assistant District Attorney Lisa Collins said. “They showed a complete disdain for the value of human life.”

Jonathan Guevara was convicted by a jury in February of this year and sentenced the jury to 99 years.

Herrera admitted to his crimes and was sentenced to 40 years in a plea agreement.

Anival Guevara, the getaway driver, was convicted Friday by a jury and sentenced Wednesday by that jury to 27 years.

The eight-day trial was handled by Collins and Assistant District Attorney Brittney Aaron.

The men, who were all from Central America, had lurked in Houston’s shadows.

Their gang, which was born in Los Angeles and thrives in El Salvador, is known for extreme violence inflicted on rivals and those who cross them.

The MS-13 is ranked by the Texas Department of Public Safety as a Tier 1 gang, in the same classification of The Texas Syndicate, Texas Mexican Mafia and Tango Blast.