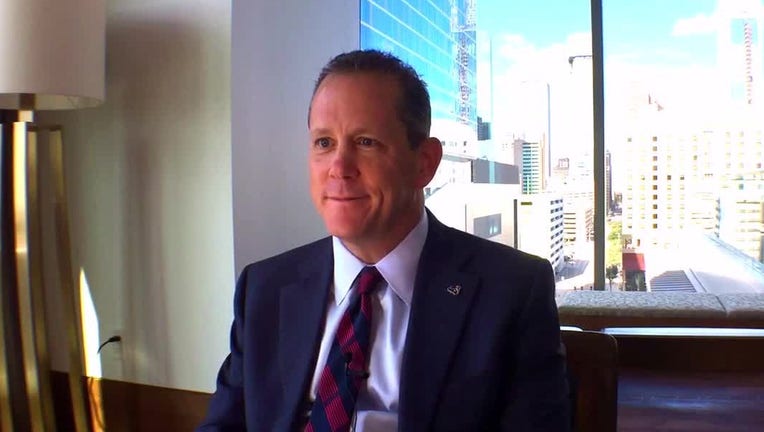 HOUSTON - Jamey Rootes, who has been president of the Houston Texans franchise since 2005, has left the organization after resigning.

The move is effective immediately.

Rootes informed his staff this morning that he is no longer president of the franchise.

"It’s not a new idea for me," Rootes said. "When (late owner) Bob (McNair) started to decline, I started thinking about am I good with making the transition from someone that’s a hero to me? I thought you know it’s kind of selfish. It’s important that the organization as stability in this window and when Bob passed I thought about it again. I love (chairman/CEO) Cal (McNair) like a brother. I really felt like I owed it to him to be here during a period of time to allow there to be a smooth transition to his leadership. As the year wound down this year I really felt like the organization is in a great place from the business perspective. We’ve got a tremendous leadership team that’s been with me, probably the average tenure is 16 years. I just thought the time was right for me to go do something different. I’ve been here for 20 years. The average tenure (for CEOs) is five years and only 20 percent that last past 10 years. It’s really not normal for someone to be in this kind of leadership position for this long. I’m young enough that there’s a new opportunity for me to go and create something which is my forte."

Rootes joined the Texans organization in 2000 as the club’s senior vice president of marketing and was promoted to team president five years later.

According to the Texans website, since joining the franchise Rootes "has overseen the team’s efforts to secure stadium-naming rights and sponsorship, coordinated radio and TV broadcasting relationships, engineered the club’s successful ticket and suite sales campaigns, led the creation and launch of the team’s identity and developed the team’s highly acclaimed customer service strategy."

Rootes has played a key role in the team selling out every game at NRG Stadium from 2002 to 2019, with that impressive streak ending because of the COVID-19 pandemic.

The Texans pointed out, under Rootes’ leadership the franchise has earned many distinctions including J.D. Power and Associates recognizing the team for providing the best fan experience in the NFL.

The Texans have also been honored by getting the Sports Business Journal’s PRISM Award, which is given annually to the top major professional sports team based on business experience criteria.

On Rootes’ watch LSSE developed the Texas Bowl, Houston’s annual college football bowl game and the Texas Kickoff, which is played every year at the beginning of each season.

Also Rootes and LSSE have hosted a number of soccer events at NRG Stadium that have been very well-received.

"It’s difficult," Rootges said. "It’s difficult because of the people. When I think about the leadership team that I’m a part of, I love them. (When he spoke to the staff) I’m gonna tell them I love every single person on that call. They’re special. They’re not only special in the absolute, they’re very special to me. The fans of this team, that’s what gives me the energy. I think about the offseason, the period from the season ends to the Draft is always the hardest time for me because we don’t have the opportunity to engage with our fans. When I go to Draft day it’s like Christmas for me."

Rootes, who is teaching a class at the University of Houston this semester, pointed to the Texans first win ever in the regular season in 2002 and their win in Cincinnati to clinch their first division title in 2011 as highlights for him.

"On the field, certainly the Cowboys game, that was special, but then when we beat the Bengals in Cincinnati..I was in the suite with Bob and the late (limited owner and vice chairman) Philip (Burguieres), just to see the joy in their faces, it was a long effort to get there," Rootes said.

The Texans released the following statement from Texans chairman and CEO Cal McNair: "We sincerely appreciate Jamey’s multiple contributions to the Texans franchise over his tenure and look forward to seeing him succeed in his new ventures. We will now build upon this foundation and move forward with a bold and unwavering commitment to winning championships, creating memorable experiences for our fans, and doing great things for Houston."